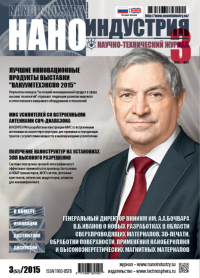 In case of acoustic wave filters, surface acoustic wave (SAW) and bulk acoustic wave (BAW) resonators, the quality depends a lot on the dimensions of several layers, hence an adjustment regarding homogeneity in sub-nm range has to be guaranteed. Within the article a technology of space-resolved correction of device wafer is described. The correction takes place due to a focused broad ion beam and a movement of wafer in front of it.

Issue #3/2015 M.Zeuner, K.Gündel, T.Dunger, M.Demmler, M.Nestler
Ion beam trimming in manufacturing of acoustic wave devices
In case of acoustic wave filters, surface acoustic wave (SAW) and bulk acoustic wave (BAW) resonators, the quality depends a lot on the dimensions of several layers, hence an adjustment regarding homogeneity in sub-nm range has to be guaranteed. Within the article a technology of space-resolved correction of device wafer is described. The correction takes place due to a focused broad ion beam and a movement of wafer in front of it.
Теги:   baw filter   ion beam trimming   saw filter   ионно-лучевой тримминг   фильтр на оав   фильтр на пав
Within the last years ion beam technologies got a strong increase of importance for material processing in optics and semiconductor industry and research.

Due to the high quality, stability and certain specific process features of the ion beam technology an exact controlling of the working parameter during processes enables a space-resolved etching of an error function down to the required geometrical dimension [3].

Hence surfaces curvatures or thickness corrections can be realized with precision, which cannot be achieved by other process technologies.

In case of SAW and BAW device wafers the center frequency of each device/resonator has to be within a specified range. During that last years, those specifications become tighter due the need to increase the data transmission rate which results more and narrower frequency bands. This means that also the thickness of the piezoelectric resonance layer and of the electrode material of all devices, distributed over the wafer, has to meet the specification within a deviation in sub-nm range. Additionally to the variation of device properties due to the production process, resonator frequencies could be out of spec due to temperature drifts. Hence as narrower the specifications for the frequency bands are, as more filters need to manufactures using ion trimming technologies and special temperature compensation. In general, the film thickness trimming could be realized by varying ion energy and ion current or by dwell time respectively velocity modulation.

Due to a pre-measurement of the target specification parameter, for example resonance frequency of the acoustic wave filters, a distribution mapping is generated as starting point. Together with the knowledge of the ion beam footprint the dwell time profile is calculated via iterative deconvolution. The ion beam footprint has to be calibrated on each material. A high precision and high performance axis system implements the scanning with the calculated movement profile of the ion beam in respect to the device wafer stage. The technology is referred to as ion beam trimming. (fig.1) The scia Trim 200 used a constant beam profile during the complete process. The trimming is realized by dwell time modulation.

The scia Trim 200 system is designed for thickness correction of wafers with a diameter up to 200 mm.

The wafer transfer is done by a 4 port handling robot connected to wafer cassette load-lock and a pre-aligning system with an ID reader. After alignment and determination of the wafer number, the wafer is handled into the process chamber with the ion beam source and axis system (fig.2). For the trimming process an X-axis with high performance is essential, because this axis controls the velocity profile of the ion beam. Together with the Y-axis for the line feed and tilt axis for wafer transfer and ion incident angle adjustment, the axis system enables a high degrees of freedom for the wafer stage movement. The wafer stage consist of the wafer chuck for accommodation of wafer via mechanical clamping ring and an alignment electrode for ion beam profile measurement. A Helium backside thermal contact realizes cooling of the wafer during process. A good cooling during process is essential to avoid any photo resist degradation or wafer breakage of sensitive materials used for SAW devices like Quartz or Lithium Niobate.

The ion beam source with the neutralizer for avoidance of wafer surface charging are mounted in the dome-shaped part of the process chamber on a Z-axis for focus adjustment. The common process gas is argon, but also other gases for example krypton and oxygen can be used. The focusing of the Gaussian-like ion beam to a diameter 3–6 mm (standard deviation) is realized by a curved 3-gird system, which consists of graphite or molybdenum.

SAW filters consist of one precisely oriented piezoelectric crystal as substrate like Quartz, Lithium Tantalate (LiTaO3) and Lithium Niobate (LiNbO3) and two interdigital transducers (IDT) on top. IDTs convert electrical signals to a mechanical wave due to two interlocking comb-shaped electrodes (finger electrode pairs) which are applied to a piezoelectric substrate (fig.3). A voltage between the electrodes result in a deformation of the piezoelectric material that generates acoustic waves propagating on the piezoelectric material surface. After resonating the other IDT transform the SAW back to an electrical signal. The resonant frequency and bandwidth can be adjusted by length, width, position and mass of the IDT.

A lot of SAW devices are using a special temperature compensation layer to avoid any frequency shift due to temperature change. Commonly silicon dioxide is used because the change of the youngs module with temperature is inverse to the substrate. With the scia Trim 200 the resonance frequency of each device can be adjusted. Due to the space-resolved ion beam etching of the SiO2 layer the right mass of the resonator structure and hence the target frequency can be reached.

As example for SAW device quality enhancement fig.4 shows pre and post frequency results of a SiO2 temperature compensation film of a 100 mm wafer. The measurement of the center frequency of each device has been used as input data. The standard deviation is reduced from 15,3 MHz to 0,5 MHz, which results in an improvement factor of over 30.

High frequency filters in mobile communication increasingly apply the BAW principle rather than the SAW principle. BAW becomes advantageous against SAW for frequencies above 2,4 GHz. The devices are very small and have a very good performance at the same time. Also the productions costs have been reduced over the last years.

A BAW filter uses a piezoelectric film commonly made of aluminum nitride, which is contacted by two electrodes (fig.5). To generate an acoustic resonator, the thickness of the piezoelectric film has to match to λ/2 of the wavelength of the longitudinal acoustic wave. Means the thickness is defined by the acoustic velocity of the piezo material and the target resonance frequency.

Additionally the resonator needs to be acoustically isolated from the substrate. There are two different types. Free Bulk Acoustic Resonator (FBAR) devices use a cavity between substrate and resonator. The Solidly Mounted Resonators (SMR), which are shown in fig.5, use an acoustic mirror to achieve an isolation from the substrate. The acoustic mirror is made of alternating λ/4 films with high and low acoustic impedance. With typical materials like silicon dioxide and tungsten, a few layers only are needed to achieve a very good isolation.

The final frequency of each device is adjusted by an additional mass load on top, which is deposit on the top electrode, e.g. silicon nitride.

The requirements for the layer uniformity of each material, especially the AlN piezo layer, are very high. Realistic deposition homogeneity deviations of 0,5% lead to the final device yield of few ten percent only. By using additional tuning steps, the ion beam trimming, the layer homogeneities can typically be improved by factor of 10 to 40 (fig.6). Thus, final device yields of more than 90 % can be achieved.

Thickness adjustments of the AlN piezo layer are most important, because its thickness directly defines the resonance frequency. The frequency is additionally influenced by the mass load of the oscillator. Thus, mass load trimming helps to further improve yield. By trimming the acoustic mirror layers, additional quality factors of the RF device can be optimized.

The scia Trim technology enables a frequency adaptation of SAW and BAW devices on a wafer in order to increase the device yield from several 10% to over 90% in industrial mass production. Without ion beam trimming a cost effective mass production of frequency filter for mobile communication is not possible.
Nanoindustry. Issue #3/2015
Readers feedback
Leave a feedback