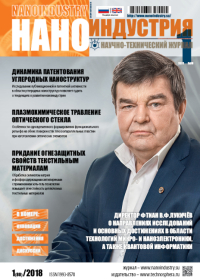 Content & Annotations of Issue #1/2018
Competent opinion
V.Lukichev
Institute of Physics and Technology: three decades of research and development in field of micro- and nanoelectronics This year marks the 30th anniversary of the Institute of Physics and Technology of the Russian Academy of Sciences, the leading scientific organization in the field of research on the fundamental problems of the creation of electronic components for micro- and nanoelectronics.
S.Preuss
Maskless lithography at new level of productivity Maskless laser lithography makes it possible to simplify the production of semiconductor devices due to the exclusion from the workflow of operations related to the manufacture, use and storage of photomasks.
G.Falk
Flexible solutions for optical quality control MueTec from Munich (Germany) has been developing and supplying high-precision optical measuring systems for the semiconductor industry for more than 25 years. More than 300 MueTec production systems are operated at manufacturing plants and scientific centers around the world, including about a dozen – in Russia.
B.Pavlov
NTSR and Transfer of World Technologies management company – implementation of priority, strategic, innovative projects for Russian economy In order to ensure effective interaction of the consortium participants, implemented
under the auspices of the Nanotechnological Society of Russia (NTSR), the Transfer
of World Technologies (TWT) management company was created, which manages
the innovative projects using the System of Management Full Lifecycle Innovational Project (SMFLIP).
Nanomaterials
A.Terekhov
Dynamics and structure of patenting carbon nanostructures Patent analysis of the carbon direction of nanotechnology has been performed. The publication and patent activity in this direction as well as the thematic structure of publications and patented inventions were compared. The features of the thematic structure of Russian inventions and also possible directions and difficulties of their commercialization are considered. The initial information was obtained from the databases of Rospatent, US PTO, WIPO PATENTSCope, and Science Citation
Index Expanded.
Tags:   carbon nanostructures   commercialization   patents   publications   коммерциализация   патенты   публикации   углеродные наноструктуры
Test & Measurement
I.Yaminsky, A.Ahmetova, G.Meshkov, F.Salehi
Combined capillary and probe microscopy The results of the first year of cooperation of scientists of the Lomonosov Moscow State University and Sharif University of Technology (Tehran, Iran) are presented. The purpose of the project "Initiation of local chemical reactions in deposited thin films using scanning probe microscopy" is to determine the effect of the environment on the nature of the surface local reactions.
Tags:   capillary probe   electrochemical oxidation   nanolithography   scanning tunneling microscope   капиллярный зонд   нанолитография   сканирующий туннельный микроскоп   электрохимическое окисление
Conferences, Exhibitions, Seminars
L.Ratkin
Future of quantum computing: from monoatomic solid elements to steganographic systems In the fall of 2017, an international conference Russian Supercomputing Days was held in Moscow, within the framework of which a seminar on quantum computing was held.
История успеха
I.Yaminsky
Ideas and innovations, factories and plants To apply what has been learned in practice, is there anything more exciting? Creative activity brings joy. Innovative activity, as a result of which a real useful product is obtained, brings joy doubly. The happy way of an idea is a movement from birth through factories and plants to a finished product. Advanced Technologies Center is being built as a place to put new ideas into practice – from design to technology, prototype and finished product.
Nanomaterials
B.Taussarova, Ye.Takey
Sol-gel technology for providing flame-retardant properties of cellulose textile materials The article considers the use of sodium silicate and phosphorus-containing flame retardants to impart flame retardant properties to cellulose textile materials. The effect of the concentration of the initial components, the temperature and the time of heat treatment on the flame retardant properties was studied.
Tags:   cellulosic textile materials   fire resistance   sodium silicate   sol gel   золь-гель   огнестойкость   силикат натрия   целлюлозные текстильные материалы
Nanotechnology
S.Odinokov, G.Sagatelyan, K.Bugorkov, E.Drozdova
Regularities and features of two-sided plasma-chemical etching of optical glass parts The simultaneous formation of the functional reliefs on both of the two working surfaces of optical plane-parallel wafers is considered in relation to manufacturing of diffractive and holographic optical elements. The technological possibilities of plasma-chemical etching of glass are investigated for the case of placement the workpiece in the plasma volume and using the diode type device with an outboard planar inductor. It is shown that the quality-limiting factor is the withdrawal of products of chemical reactions from the treated surface.
Tags:   functional relief   inductively coupled plasma   optical glass   plasma-chemical etching   the performance of the etching   индуктивно связанная плазма   оптическое стекло   плазмохимическое травление   производительность травления   функциональный рельеф
M.Tarasov, I.Chicherin, I.Pogorelsky
Selective effect of nanostructured preparations on pathogenic bacteria Complex multidisciplinary research on the interaction of nanostructured preparations with intestinal microbiota and intestinal infections was recognized by the International academy of authors of scientific discoveries and inventions by scientific discovery with priority on the date of filing the application No.A-652 of December 27, 2016.
Tags:   intestinal infections   intestinal microbiota   nano-therapy   кишечная микробиота   кишечные инфекции   нанотерапия
Разработка: студия Green Art