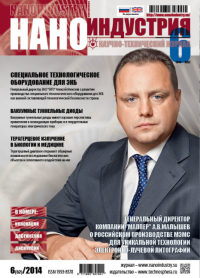 Content & Annotations of Issue #6/2014
Competent opinion
A.Malyshev
Russian MEMS for unique lithography technology In July Mapper LLC, a subsidiary of the Dutch company Mapper Lithography, has launched
a plant for the production of MEMS at the Moscow Technopolis. A co-investor of the project is Rusnano Group, which has invested 40 million euros
in the groundbreaking maskless lithography, developed by Mapper Lithography. The investments in the launch of the Moscow-based facility amounted to about 1 billion rubles. About past, present and plans for the future of the project
told the General Director of Mapper LLC
Andrey Malyshev.
A.Alekseev
Development of special equipment for electronic components production as an important component of the country’s security The St. Petersburg company SemiTEq JSC since 2001 develops and manufactures equipment
for the manufacture of advanced electronic components. The company’s solutions have
a high reputation and are popular not only
in Russia but also in the international market.
The General Director of SemiTEq JSC Aleksei Alekseev told us about a state and actual
problems of the Russian electronic mechanical engineering, successful experience in the international market and a problem of import substitution.
Test & Measurement
G.Gareev, V.Luchinin
Applications of terahertz radiation in biology and medicine Terahertz range occupies an intermediate position between the microwave and optical parts of the electromagnetic spectrum. In this range are line rotational transitions of molecules, as well as vibrational and vibrational-rotational transitions of large molecules, including organic, which opens up opportunities for their research and for selective effect on them.
Tags:   nanoparticles   nano-sized imaging contrast agents   spectroscopy   terahertz radiation   наноконтрастные агенты   наночастицы   спектроскопия   терагерцевое излучение
Нанотехнологии и образование
I.Yaminsky
The Nanotechnologies YICC: first steps In September was launched a new project of Lomonosov Moscow State University and the Advanced Technologies Center Company - the Nanotechnologies youth innovation creativity center, established with the support of the Moscow Department of Science, Industrial Policy and Entrepreneurship and of the Innovation Development Centre of Moscow. A few months have passed since the previous publication about background of establishment of the youth innovation creativity center and the center’s staff began
to implement plans and concepts.
Tags:   education   instrument engineering   scanning probe microscopy   подготовка кадров   приборостроение   сканирующая зондовая микроскопия
Conferences, Exhibitions, Seminars
N.Sokolovskaya
Moscow Composite Cluster: first experience and prospects of development 17 September in Moscow the congress-exhibition Composite Build 2014 was held. It has brought together professionals interested in the development of composite materials industry. Business program of the event included a discussion about aspects of the use of composites in the construction of buildings and infrastructure, as well as about the problems in the industry as a whole. In particular, the moderator of the plenary discussion, the director of the Interdisciplinary Engineering Centre New Materials, Composites and Nanotechnologies (Composites of Russia) of the Bauman Moscow State Technical University (BMSTU) Vladimir Nelyub spoke about the establishment of the Moscow Composite Cluster in order to develop in Moscow the production of composite materials, as well as R&D infrastructure for the industry of composite materials.
Issues of patenting
D.Sokolov
Patenting of essentially new technologies What to do if the technology is developed, brings results, but is not yet recognized by the scientific community? This article discusses some approaches to the protection of such new technologies.
Tags:   patenting of technologies   scanning probe microscopy   патентование технологий   сканирующая зондовая микроскопия
Expert’s opinion
D.Lovtsyus, A.Useinov, A.Pyatov
Impact of international sanctions and the policy of import substitution International sanctions against Russia's most economically developed countries of the world belong to the category of force majeure, the occurrence of which cannot be foreseen, and the expiration is dependable. What was the effect of international sanctions on entities of the Russian nanoindustry and visible whether the beneficial effect of the declared government policy of import substitution? These questions are answered by our experts.
Reportage from laboratory
D.Gudilin
Electronics, vacuum technology and nanoengineering This year will be the 75th anniversary of the first russian development of equipment for the production of electron devices, which were made by the students of the Bauman Moscow State Technical University. Since then and until today the graduates of one of the leading Russian technical universities play a critical role in the development of micro - and nano-electronics and vacuum technology.
Tags:   nanotechnology   thin film deposition   vacuum equipment   вакуумное оборудование   нанесение тонкопленочных покрытий   нанотехнологии
Nanotechnology
S.Nesterov, A.Kholopkin
Vacuum tunnel diodes Vacuum tunnel diodes (VTD) can be used in cooling devices and in solid-state electric generators. Quantum-mechanical calculations of the maximum electric power and efficiency of VTDs depending on the width of the vacuum gap and
on the temperature difference between the electrodes in the mode of electricity generation shows promise for their use in the electrical generators, working on a variety of heat sources in the least used temperature range of 300-600°C.
Tags:   electrical generators   vacuum tunnel diode   вакуумные туннельные диоды   генераторы электрического тока
V.Koledov
"Nano-fingers" for nanoengineers In Russia, created a toolkit for researchers and nanoengineers, which allows you to perform 3D manipulations of nanoparticles. The work with nanoinstruments is also easy and convenient as with a conventional macroelements. The project develops the Centre of Nanotechnologies and Nanomaterials of the Republic of Mordovia.
Tags:   nanoelectronics   nanoengineering   nanomanipulator   наноинженерия   наноманимуляторы   наноэлектроника
P.Lyahov, P.Gorelov
Microchip-based express diagnostics of botulinum toxins Botulism is a life-threatening human infectious disease. Delayed diagnosis of infection leads to death in 60 % of cases. The disease develops rapidly, often in just a few hours after penetration of the pathogen into the body, so it is very important to make an accurate diagnosis at an early stage. Since traditional laboratory diagnostics requires more than one day, of great interest are the new devices that perform express analysis using the microchips. In particular, the analyzer of toxins and pathogens ePaTOX II allows to define the botulinum toxins of types A, B, E and F for 20 minutes, to neutralize them and alleviate the suffering of patients.
Tags:   express analysis   microchip   микрочип   экспресс-анализ
Разработка: студия Green Art