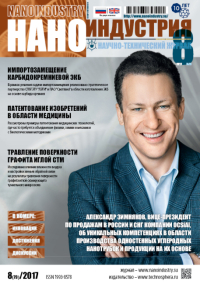 Content & Annotations of Issue #8/2017
Competent opinion
A.Zimnyakov
Nanomaterials that will change world OCSiAl is an international company with Russian roots, the undisputed world leader in the production of single wall carbon nanotubes (SWCNT). The company's developments are protected by Russian and foreign patents, and so far none of the competitors has been able to create industrial technologies that could compete with the innovations of OCSiAl. We offer our readers an interview with Alexandr Zimnyakov, Vice president of sales in Russia and the CIS.
R.Hovers
Comprehensive solutions for sample preparation and materials testing At the Control 2017 exhibition in Stuttgart (Germany), Buehler (USA) has presented equipment and materials for sample preparation, as well as hardness testers. The company’s solutions, which have been operating on the market for more than 80 years, are well known in Russia and are widely used in domestic science, education and industry. Richard Hovers, Sales Director Distribution, EMEA & India, told us about new developments and market policies of Buehler.
C.Kunig
Innovative non-destructive testing of physical properties Development of non-contact non-destructive systems for control of geometric dimensions, shapes and mechanical properties is one of the important areas in the development of modern research and industrial control and measuring equipment. One of the leaders in this area is Dantec Dynamics from Denmark. The company has its roots in the electronics development department established by Dansk Industri Syndikat (DISA) in 1947. For 70 years Dantec Dynamics has been developing new measurement technologies, cooperating with the world's leading scientific centers and associations, including CECOST of Lund University (Sweden), IUSTI (France), Bergakademie Freiberg (Germany), ASNT (USA), BSSM (United Kingdom). In Russia, the equipment of Dantec Dynamics is represented by Novatest. At the Control 2017 exhibition in Stuttgart (Germany), Christoph Kцnig, International Sales Manager, told us about the solutions of the Danish company.
Test & Measurement
O.Sinitsyna, I.Yaminsky
Etching of graphite surface with STM needle The influence of air humidity and adjustment of the feedback links on the results of etching of the graphite surface by the needle of a scanning tunneling microscope is studied. Based on the results of the experiments, a hypothesis is proposed about a mixed mechanism of graphite etching, including the destruction of the surface by electrons emitted from the tip of the microscope needle, and electrochemical oxidation.
Tags:   electrochemical oxidation   metal probe   nanolithography   scanning tunneling microscope   металлический зонд   нанолитография   сканирующий туннельный микроскоп   электрохимическое окисление
A.Ahmetova, I.Nazarov, G.Presnova, M.Rubtsova, A.Egorov, I.Yaminsky
Detection of protein biomacromolecules using piezoceramic biochip The design of the piezoceramic cantilever biochip and methods for detecting protein macromolecules for use in medicine are considered.
Tags:   biochip   biosensor   cantilever   microalbumin   probe microscopy   protein macromolecules   белковые макромолекулы   биосенсоры   биочип   зондовая микроскопия   кантилевер   микроальбумин
Conferences, Exhibitions, Seminars
D.Georgiev
Innovative production of composites: from rebar to electric bus modules In September-October, the first in Russia all-composite electric bus created by the Nanotechnology Сentre of Сomposites (NCC) and the Evopro Group was tested on the streets of Moscow. NCC produces a self-supporting modular fiberglass body, the use of which has allowed to significantly reduce the mass of the vehicle.
Implementation of scientific developments: from theory to practice The II All-Russian scientific-practical conference of students, graduate students, young scientists and specialists was held in Moscow. It was devoted to the problems of practical implementation of developments in priority areas of science and technology.
L.Ratkin
On strategy of scientific and technological development of Russian Federation in sphere of new technologies At the meeting of the Presidium of the Russian Academy of Sciences, the prospects of developing fundamental and applied science and its interaction with industrial corporations in various fields, were discussed.
Issues of patenting
D.Sokolov
Patenting inventions in fieldof medicine Each department of the Federal Institute of Industrial Property (FIPS) has its own practice of considering applications for inventions. At the same time, each field of technology has its own specificity of equipment, technologies, practice of creating new solutions and their patenting. Departments associated with medicine also have their own peculiarities of patent examination.
Tags:   medical technologies   patenting   protection of invention   защита изобретений   медицинские технологии   патентование
Nanotechnology
A.Afanasyev, V.Vyuginov, N.Gladkov, A.Zybin, V.Ilyin, V.Klevtsov, V.Kutuzov, V.Luchinin, V.Popov
Import substitution of silicon carbide electronic components. Strategic partnership of LETI and Svetlana PJSC As part of the import substitution task with the aim of ensuring technological independence and state security, the strategic partnership of LETI and Svetlana PJSC in the field of organization of the domestic technological route for the manufacture of electronic components based on silicon carbide was realized.
Tags:   electronic components   high-frequency electronics   power electronics   silicon carbide   высокочастотная электроника   карбид кремния   силовая электроника   электронная компонентная база
D.Mustafaeva, M.Mustafaev, G.Mustafayev
Formation of structures of sensitive elements of film transducers with given electrophysical parameters Conditions for the formation of structures of sensitive elements with given electrophysical properties for creating film transducers are considered. The obtaining of materials with predetermined properties and thin films of chalcogenides of the elements of the first group with the reproduction of the parameters of the compounds of the starting material on the film was studied. The technology of creating film transducers with specified characteristics is compatible with other processes of microelectronics and provides constructive and technological compatibility of the elements of transducers.
Tags:   chalcogenides of elements of first group   sensors   thin-film technologies   датчики   тонкопленочные технологии   халькогениды элементов первой группы
Economics
Kh.Alaghi
Relationship between R&D costs and systematic risks of companies The aim of this article is to evaluate the impact on financial variables on the systematic risk of the listed companies in Tehran Stock Exchange. The evaluation of R&D costs of the listed companies in Tehran Stock Exchange is a difficult process, as there are still some problems in the accountancy calculations, particularly problems of facing costs.
Tags:   degree of financial leverage   degree of operating leverage   systematic risk   систематический риск   эффект операционного рычага   эффект финансового рычага
Разработка: студия Green Art