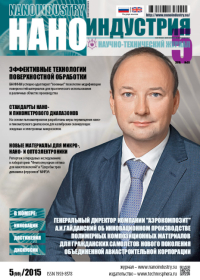 Content & Annotations of Issue #5/2015
Competent opinion
A.Gaydansky
Russian composites for aircraft construction, the unique competences of AeroComposite In 2008, United Aircraft Corporation (UAC), Sukhoi Aviation Holding Company and Progresstech founded AeroComposite company, in order to promote polymeric composite materials (PCM) in the Russian aircraft industry. AeroComposite has become one of the key Russian contributors in the development of a new generation of aircraft for civil aviation. For the development of the project in 2012 in Ulyanovsk and Kazan the construction of the industrial enterprises AeroComposite-Ulyanovsk and KAPO Composite was started; a year later the Experimental PCM Technology and Design Laboratory was established in Moscow. After the launch of the first phase of manufacturing facilities the total staff of the company (including subsidiaries) reached 1,000. It is not for nothing that AeroComposite is one of the world’s technology leaders in the manufacture of PCM items for aircraft construction. The CEO Anatoly I. Gaydansky described the core competencies, projects and prospects of the company.
E.-J.Vesseur
High-end class electron microscopes and focused ion beam systems The FEI company (the Netherlands) and its Russian partner – Technoinfo company – were among the sponsors and active participants of the XIX Russian Symposium on scanning electron microscopy and analytical methods of solids investigations. FEI is one of the world leaders in the field of electronic, ionic and correlative microscopy operating in the market for over 60 years. The company offers wide range of solutions of different levels for scientific research and industrial measurements of objects in the micro-, nano-, and picometer scales. Devices by FEI are successfully used in materials science, life sciences, electronics, natural resources, as well as in many other fields. Equipment of the company is installed in the largest Russian scientific and educational centers. About the main directions of development and market trends in microscopy told Ernst-Jan Vesseur, Product Marketing Manager & Sr. Application Scientist at FEI.
Test & Measurement
A.Potemkin, P.Luskinovich, V.Zhabotinskiy
Standards for nano- and picometer ranges on the basis of displacement gauges On the basis of single crystal materials with inverse piezoelectric effect the displacement gauges of nano- and picometer ranges are developed, which can be used for calibration of scanning probe and electron microscopes. The displacement of the gauges was measured by optical interferometers based on the lasers with the Bragg and cesium cells frequency stabilization. The displacement gauges and interferometers can be used as manipulators and sensors in process equipment and measuring devices, as well in labs on nanomaterials, nanomechanics and nano-metrology.
Tags:   calibration   displacement gauge   electron microscope   interferometer   probe miocroscope   зондовый микроскоп   интерферометр   калибровка   мера перемещения   электронный микроскоп
Conferences, Exhibitions, Seminars
D.Georgiev
New in studies of nanostructures and nanomaterials using electron and scanning probe microscopy June 1-4, Chernogolovka hosted the XIX Russian Symposium on scanning electron microscopy and analytical methods of solids and III School of young scientists "Electron and scanning probe microscopy in studies of nanostructures and nanomaterials" organized by Institute of Microelectronics Technology and High-Purity Materials of the Russian Academy of Sciences and the Shubnikov Institute of Crystallography of the Russian Academy of Sciences. Financial support was provided by Russian Foundation for Basic Research, as well as by companies Tokyo Boeki, CMA, Optec, TechnoInfo, Bruker and Oxford Instruments.
D.Georgiev
Solutions for process measurement and control by IMC Group On June 18 at Moselectronproject JSC hosted a seminar entitled "Systems for control, inspection and R&D in the electronics industry", in which specialists of the Industrial Monitoring and Control group of companies (IMC Group) presented up-to-date solutions for process control of micro- and nanoscale structures in research and production of electronic components.
История успеха
I.Yaminsky
Advanced Technologies Center: the first 25 years Stable growth of the economy as a whole is possible only under the condition of sustainable development of enterprises, both large and small. Here is the short story about 25 years of successful activity of the Advanced Technologies Center and its products: scanning probe microscopes Scan 7, FemtoScan and FemtoScan X. Among the latest achievements of the enterprise is the creation of the Nanotechnologies Youth innovation creativity centre, the aim of which was to attract schoolchildren to practical activities in the field of modern nanotechnology
Tags:   3d printer   3d принтер   cnc milling and engraving machine   cканирующий зондовый микроскоп   nanoindustry   nanotechnology   scanning probe microscope   наноиндустрия   нанотехнологии   фрезерно-гравировальный станок с чпу
Nanomaterials
S.Erin
Graphene: the present shapes the future Graphene (Cn) is a material composed of a single layer of carbon atoms, which was relatively recently discovered and is of high interest in the scientific world. It has a chance to become a core element for future electronic devices the same way as silicon 50 years ago, and is also very promising in many other areas. To obtain graphene can be used well-known technology of chemical vapor deposition (CVD)
Tags:   chemical vapor deposition   graphene   nanofilm   графен   нанопленка   химическое осаждение из газовой фазы
Expert’s opinion
D.Vagizov, D.Lovtsyus, M.Savinov
Service support for high-tech equipment Качественная сервисная поддержка – одно из необходимых условий эффективной эксплуатации и большого срока службы оборудования. Особенно актуальна эта проблема в сфере высоких технологий, где применяются не только технически сложные, но и нередко уникальные машины и приборы. В связи с этим мы попросили руководителей и специалистов ведущих поставщиков технологического и исследовательского оборудования рассказать об организации работы сервисной службы в их компаниях, оперативности оказания помощи, применении удаленной диагностики, обслуживании региональных клиентов.

High-quality service support is one of the necessary conditions for effective operation and long life of the equipment. This problem is particularly relevant in the high-tech, where are used not only technically complex, but often unique machines and devices. In this regard, we asked the managers and specialists of the leading suppliers of process and research equipment to tell about the organization of the service support in their companies, timeliness of support, the use of remote diagnostics, servicing regional customers.
Reportage from laboratory
D.Gudilin
Research into new materials for electronics at MIREA In 2004, at the Moscow State University of Information Technologies, Radio Engineering and Electronics (MIREA) a research team was established, led by Professor Elena Mishina, D.Sc., which had been researching the ferroelectric effect in solid-state thin-film structures. In the same year, the first femtosecond lasers were purchased, and the students and graduates joined the activities, thus making it possible to carry the research to a new level. Subsequently, based on the team, the educational and research laboratories "Femtosecond Optics for Nanotechnology" and "Ultrafast Dynamics in Ferroics" were set up at the Department of Physics of Condensed Matter of MIREA. The obtained results were so significant that the Laser Physics and Technology was recognised as one of the priorities in the research activities of the University as a whole. The research is funded under the federal targeted programme, the Russian Government’s megagrant (at the order of r220), the projects of the Russian Foundation for Basic Research and the Russian Science Foundation.
Nanotechnology
A.Titov
Advanced materials and technologies for modern constructions Supported by the TVEL Fuel Company and based on the cutting-edge innovations, Bochvar High-technology Research Institute of Inorganic Materials (VNIINM) is setting up the up-to-date industrial production of functional nanostructured coatings with a wide range of materials, technologies and equipment for applying them. Modern technologies should become one of the basic elements to improve efficiency and reliability as well as expand the operational capabilities of products for industry. VNIINM successfully adapts the "military" technologies designed to surface to modify material surfaces for the civil sector. Modern coatings can solve a variety of tasks, e.g. make the oil and gas equipment stronger and more durable, ‘heal the wounds’ on the details of the aircraft and improve the quality of implants…
Tags:   gas dynamic cold spray   nano-coating   nanostructure   surface protection   защита поверхности   нанопокрытие   наноструктура   холодное газодинамическое напыление
V.Verner, E.Kuznetsov, A.Saurov
Fiftieth anniversary of Moore’s Law: Development of micro- and nanoElectronics The second part of the article examines how Moore’s Law influenced the development of micro- and nanoelectronics, and what changes it caused in the structure of the industry. It is noted, that Moore’s Law greatly influenced the development of semiconductor electronics by setting high growth rate of microelectronics. Subsequently, it contributed to the emergence and development of new areas, for example, MEMS and nanoelectronics.
Tags:   integrated device manufacturing   internet of things   mems   micro- and nanoelectronics   интегрированное производство   интернет вещей   микронаноэлектроника   мэмс
Разработка: студия Green Art