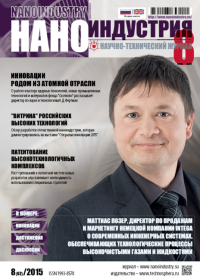 In the international consortium for developing complex diagnostic test-systems for rapid detection of tuberculosis mycobacteria and their antibiotic-resistant forms, Russia is represented by the Advanced Technologies Center, Lomonosov Moscow State University and Central Research Institute of Tuberculosis. It is planned to develop several test systems for integrated diagnosis using molecular-genetic and immunologic methods of mycobacteria biochip-based multi-analysis.

Issue #8/2015 M.Rubtsova, M.Ulyashova, G.Presnova, A.Egorov, E.Larionova, L.Chernousova, I.Yaminsky, D.Yaminsky, A.Ahmetova
Improved diagnostic strategies for the detection of TB disease and drug resistance at the point-of-care by multiple technologies
In the international consortium for developing complex diagnostic test-systems for rapid detection of tuberculosis mycobacteria and their antibiotic-resistant forms, Russia is represented by the Advanced Technologies Center, Lomonosov Moscow State University and Central Research Institute of Tuberculosis. It is planned to develop several test systems for integrated diagnosis using molecular-genetic and immunologic methods of mycobacteria biochip-based multi-analysis.
Теги:   biochip   medical diagnosis   mycobacterium   scanning probe microscopy   tuberculosis   биочип   медицинская диагностика   микобактерия   сканирующая зондовая микроскопия   туберкулез
In the past decades, many countries, regardless of their economic status and living standards, have seen a steady rise in the tuberculosis (TB) incidence. Therefore, developing new methods of TB diagnosis and treatment remains to be a vital task. According to WHO [1, 2], improving these methods helped to reduce the mortality by 45% between 1990 and 2013, which, in absolute terms, amounts to dozens of millions of saved human lives. However, the figures remain alarming: according to the estimates of WHO, 9 million people were infected with TB in 2013, and nearly 64% of the cases were detected for the first time. The mortality amounted to 1.5 million people in 2013. Especially dangerous is the combination of TB and HIV infections, which are more difficult to diagnose and treat. Nearly 1.1 million (13%) of all TB patients are HIV infected.

The essential problem is the resistance of TB Mycobacteria (M. tuberculosis) to antibiotics used as the main treatment of this disease [3, 4]. Currently, specialists distinguish the following types of resistance:

Research in different regions of the world revealed that more than a half of resistant TB pathogens are found in three countries: India, China and Russia. Inadequate treatment may cause a certain selectivity of resistant strains. From the clinical perspective, the causes for emergence of resistant strains are late diagnosis of resistance to primary drugs and inadequate or incomplete prior treatment. The XDR TB resistance is the hardest to treat. The risk factors for XDR emergence are the primary MDR, common two-way lung processes, more than three tuberculosis chemotherapy cycles in a patient’s history, and use of the second line anti-TB drugs the in the prior chemotherapy courses.

Russia is a country with a high TB incidence. The most significant and important problem related to the TB epidemic is the widespread of strains resistant to most drugs used in an antituberculosis therapy. The greatest danger is associated with an increase in the XDR TB share from 4.9% to 20% [1]. These patients represent a dangerous “reservoir” of resistant infections, which are not treatable by known antibiotics. There is a serious risk of the uncontrolled spread of XDR Mycobacteria strains. The disease is transmitted by airborne droplets, which create a threat of their spreading in large cities with high population density and large flows of migrant, many of whom are not examined. Therefore, it is important to prevent the increasing incidence of severe TB forms characterized by high mortality.

The methods of molecular genetic analysis appear especially promising because drug resistance is associated with mutations in genes of TB Mycobacteria. In recent years, sequencing technologies and multiplex molecular-genetic analyses have been rapidly developing with technologies such as multiplex PCR, real-time PCR, PCR with subsequent hybridization on biochips of various types [5-7]. Sequencing is mostly used in scientific research, because it is too complex for practical application in clinical laboratories, being characterized by high equipment cost and limitations associated with high chances of obtaining false results.

The variety of resistance forms and presence of strains resistant to multiple drugs require developing technology for tuberculosis mycobacteria analysis on biochips for rapid detection of the pathogen and detection of its resistance to antibiotics of both the first and second lines within one analysis. Multiplex analysis on biochips reveals dozens, hundreds, or even thousands of species-specific genetic sequences, as well as genetic variations, that determine the mycobacteria resistance to antibacterial therapy.

Advanced Technologies Center, Lomonosov Moscow State University and Central Research Institute of Tuberculosis participate in the international project Multi-TB on the creation of biochips used for identification of genetic sets and mutations within one analysis. The project’s foreign partners are the German Branch for Bioanalysis and Bioprocesses of Fraunhofer Institute for Cell Therapy and Immunology, and the German company LIONEX Diagnostics & Therapeutics. The goal of the international consortium is to develop a complex of diagnostic test-systems for rapid detection of TB Mycobacteria and identification of their antibiotic-resistant forms using molecular-genetic and immunological diagnostics. The project is expected to create several types of diagnostic systems.

All the methods that have been developed so far and registered for practical application have limitations associated with insufficient multiplexity or complexity and high analysis cost. None of the methods can simultaneously identify M.Tuberculosis and determine its resistance to both the first and second line drugs. Usually, the processes that provide high multiplexity are hard to implement, time-consuming and require expensive components and equipment, which limits their use in real practice.

The Multi-TB project is planning to develop several diagnostic test systems, which for comprehensive diagnosis in three stages. The first stage involves a rapid sputum test detecting mycobacteria in a few minutes using specific antibodies labelled with gold nanoparticles. To confirm the positive results, the project will develop a test-system based on a biochip cartridge that combines chip-based multi-analysis and fluid technologies. As specific reagents to detect the specific patterns of antibodies in a patient, the project will use protein antigen markers. The same biochip will be supplemented with HIV antigens for simultaneous detection of TB and HIV co-infection. For the third stage of diagnosis, the project will develop molecular genetic methods to detect genetic markers of mycobacteria drug resistance using of biochip-based multi-analysis.

In connection with the need for large-scale screening studies of the TB agent spread and its antibiotics-resistant forms, the strategy will be focused on technology performance, analysis duration and feasibility in different level diagnostic laboratories.

The Russian partners develop a diagnostic test system to conduct molecular-genetic multi-analysis for rapid detection of TB mycobacteria and drug resistance of both the first and second lines in one analysis. The technological solution is based on colorimetric detection, the advantages of which were demonstrated during the identification of bacterial resistance to beta-lactam antibiotics [8]. The qualitative distinction from the current molecular genetic techniques will be in fundamental expansion of the genetic markers range used to identify the resistance type to antibiotics of both the first and second line. The qualitative distinction of biochip technology will consist in the selection of their production methods, hybridization analysis and detection. To simplify the method, reduce the analysis duration and adapt it to the potential of clinical laboratories, the biochips will be created with the help of contact printing in the cells of 96-cell plates (fig. 1) divided into 8-cell strips. This will simplify the stages of hybridization, detection and washing, which can be performed using standard equipment for enzyme immunoassay available in laboratories of different levels. Hybridization analysis conditions will be optimized with the aim of reducing duration while maintaining the required sensitivity and specificity. The automation capacity of various analysis stages will reduce the overall analysis duration.

The colorimetric detection system will be based on using biotin as a DNA label and on detection of its streptavidin conjugate with peroxidase enzyme. The positive results of complementary hybridization will be shown by biochip staining (fig. 2) registered using optical equipment. This will help to develop a cheaper detection system as compared to the current commonly used fluorescent detection.

The effective tool for optimizing the molecular-genetic tuberculosis detection technology is scanning probe microscopy, which is used as a direct way to observe the biochip surface during its production and use for diagnosis (fig. 3, 4). Papers [9,10] present a brief overview of atomic force microscopy (AFM) used to examine the microchip surface with immobilized oligonucleotide probes and to analyze the hybridization of DNA-targets; there are well-developed approaches to AFM-based quantitative analysis of DNA on microchips using such parameters as the height, area and volume of the items in AFM images; the results of AFM examination of DNA microchip surface were reviewed before and after hybridization and DNA detection using gold nanoparticles as markers.
Nanoindustry. Issue #8/2015
Readers feedback
Leave a feedback