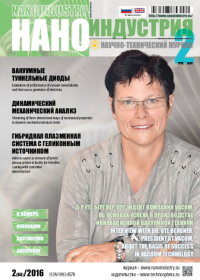 The article describes the method of constructing a three-dimensional map (tomogram) of the distribution of hardness and modulus of elasticity (Young’s modulus) based on dynamic mechanical analysis mode. A thin film of copper on a glass substrate was used as a test object.

These changes are largely caused by the development of measurements of hardness and elastic modulus by instrumental indentation [1]. This method is based on registration and analysis of dependence between the load applied to the indenter and depth of its penetration into the material. One of the main advantages of instrumental indentation is the possibility of automating the measurements and data processing.

The separate direction of development of methods based on instrumental indentation is the determination of the dependence of mechanical properties on the depth of penetration of the indenter into the surface of the material. This is achieved either through a series of pricks with various maximum load or using multicyclic indentation with partial removal of the load (partial unloading indentation, PUL) or in the dynamic mechanical analysis (DMA) mode. DMA is based on the loading at which the harmonic force of given amplitude is added to monotonic indentation of the needle with a linear sweep of a normal load or depth of penetration [2]. The measured amplitude and phase shift, as well as average for the period of oscillation magnitudes of the force and penetration into the sample, allow to determine elastic modulus, loss modulus and hardness of the material. And the last three quantities are almost continuous functions of the depth h. The combination of these methods of profiling of the mechanical properties of the subsurface volume of the sample with the possibility of high-precision lateral positioning of the indenter allow to implement a wide set of methods for study of spatial inhomogeneity of mechanical properties. Such tasks are especially relevant for objects that are structured either in the normal direction to the surface (coating film) or in the lateral plane (heterostructures, multiphase materials, topologically structured micro- and nano-objects).

All of these methods of measurement are implemented in the NanoScan-4D scanning nano-hardness tester (TISNCM, Russia). NanoScan-4D nano-hardness tester is the only Russian measuring instrument, which allows to carry out complex studies of physical-mechanical properties of materials at submicron and nanometer scale of linear dimensions [3–7]. General view of the device is shown in Fig.1. NanoScan is equipped with motorized sample stage for positioning of the indenter in the XY plane over the sample surface with high accuracy. A specialized macro language allows to program the execution of large series of measurements in an automated mode.

A heterogeneous structure, the film of copper on a glass substrate has been chosen as object of research. The coating was obtained using AJA Orion-8 (USA) magnetron sputtering system on the top of the mask, whereby the sample contained both the area covered by the copper and glass without coating.

The thickness of the layer was determined using sclerometry: the film surface was scratched with a pressing force of 200 mN. Then in the transverse direction profiling of a surface in the mode of the scanning probe microscope has been made. During profiling the device operated in a resonant oscillating mode. The surface topography was measured by semi-contact scanning with maintaining a constant phase shift of the oscillations. The image of the surface profile is shown in Fig.2.

Due to the difference of the coefficients of the elastic recovery for the substrate and film, base glass is recovered more than plastic layer of copper, therefore the bending in cross-section of the scratches is visible. Depth, at which this effect is noticeable, is about 350 nanometers (Fig.2) that corresponds to thickness of a copper coating, based on parameters of magnetron sputtering.

For determination of mechanical properties of the studied object the DMA method has been used. The measurements set in the field, which included both the film surface and the uncovered part of the glass, was 10Ч10 pixels. As mentioned above, this approach allows to estimate the distribution of mechanical properties in the three spatial coordinates.

Each DMA measurement was performed at a frequency of 20 Hz, the average amplitude of oscillations under loading was 10 nm. The loading was performed for 80 seconds in the mode of linear sweep of penetration depth on time. The distance between the measurements (between the prick into the surface) was 200 μm. The obtained values of hardness and elastic modulus are presented in Fig.3. The average probe position over the period of the oscillations is used as the value of depth. This value corresponds to the maximum depth of the indentation during single pricking in contrast to the contact depth, the value of which is closer to or equal to the depth of the residual imprint.

As can be seen from the data obtained, evaluations of hardness and elastic modulus correspond to the typical behavior of soft coatings on hard substrates and the measured hardness of the coating remains almost unchanged up to the depth when the tip of the indenter reaches a solid substrate. This can be explained by the fact that the stresses in the material are insufficient for plastic flow of the substrate. At the same time, any stresses under the indenter lead to elastic deformation of both film and substrate. Therefore, the measured values of the modulus of elasticity of the system begin to aspire to those for the substrate, and the effect is observed from depths equal to the film thickness fractions.

Thus, these data represent integral quantities, which are typical for the heterogeneous environment. To obtain separate values corresponding to hardness of film and substrate, it is possible to use numerical simulations or to approximate the dependences on the depth using analytic functions. An example of the latter approach can be found in [7].

Optical micrograph of the measured area is shown in Fig.4. Despite the fact that all indents were made to a predetermined depth, in the area of film deposition they size is larger. This fact is explained by significant difference of hardness and ratio of elastic recovery of film and substrate.

It should be noted that the positioning system of sample stage has the high accuracy and reproducibility thanks to what the device provides uniform distribution of measurements, even at quite large areas of the sample surface.

The implemented method allows to obtain a much better detailing of mechanical characteristics depending on depth compared with the method based on multicyclic indentation (PUL) [3]. Thus, the time of obtaining the tomogram is significantly reduced.

A wide range of values of the applied load provides a considerable depth of mapping. Dynamic resonance mode allows to measure the surface profile both before and after measurements of mechanical properties.


The project was financially supported by the Ministry of education and science of the Russian Federation under the agreement No.14.577.21.0088 (unique identifier of project RFMEFI57714X0088).
Nanoindustry. Issue #2/2016
Readers feedback
Leave a feedback