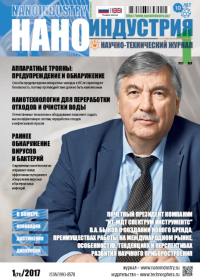 Issue #1/2017 D.Koptsev, O.Kuznetsova, N.Shelepin
Low noise amplifier based on 0.18 µm silicon-on-insulator technology
Experimental study of implementation of the LNA based on 0.18 µm CMOS SOI technology is conducted. The advantages of the SOI technology for the manufacture of microwave IC are discussed. LNA with six levels of aluminum metallization, has been designed and manufactured using CMOS SOI technology.
Теги:   integrated circuit   low noise amplifier   soi   интегральная схема   кни   малошумящий усилитель
Communication systems, L- and S-band radars are developing rapidly at present, largely due to the advances of submicron silicon technologies, providing low cost of devices at mass production and high IC density. For the design of transmitter-receiver systems the development of an appropriate electronic components, including amplifiers, mixers, multipliers and other functional elements is necessary. Creation of IC with improved noise immunity, power consumption, speed, and "smart" power requires the development and application of new manufacturing processes [1].
Low-noise microwave amplifier is one of the main devices of microwave technology, which is used in radio communication systems and radars, broadcasting, automation, computers, household appliances, etc. The main purpose of the LNA is the minimum noise figure in the amplification, which should be sufficient to ignore noise of subsequent paths. Minimization of losses, improving of amplification characteristics and expansion of operating frequency range are particularly relevant for modern LNA.

The aim of this work is to study the application of the SOI technology for the development of LNA.
JUSTIFICATION OF CHOICE OF SOI
SOI structures have significant advantages compared to conventional monolithic silicon, and are used to develop radiation-resistant IC (and devices based on them), IC with low power consumption, and to create MEMS. The essential advantage of the SOI technology is a full dielectric isolation of the n- and p-wells, thanks to what there are no parasitic four layer n-p-n-p structures, and no latch-up that is inherent in the bulk CMOS technology [2–4].
SOI technology allows to implement complex analog-to-digital circuits and to significantly improve the performance of microelectronic devices while reducing power consumption and dimensions [5].
It should be noted that the SOI technology do not guarantee a high radiation resistance. For 180 nm process the change of the threshold voltages of transistors at dose ionizing radiation become insignificant due to the very small thickness of the gate dielectric. Although SOI automatically excludes inter-transistor leakages, there is a problem of intra-transistor leakage in n-MOS-devices due to the accumulation in the hidden oxide of positive charge and inversion of conductivity type in a region adjacent to the hidden oxide that leads to unacceptable increase in leakage currents [6]. In particular, the paper [7] is dedicated to the problems of modeling these effects in CMOS SOI.
DEVELOPMENT
OF LOW-NOISE AMPLIFIER
LNA is a versatile device and can be used in the receiving and transmitting paths, measuring installations, as a part of the active filters, etc. This class of devices, in many cases, determines the most important performance parameters of radio systems, such as the sensitivity of the receiving path, the bandwidth of operating frequencies, reliability and cost.
Designed LNA is based on cascode scheme and n-MOS transistors [8]. The length of the channels of the transistors is 0.18 µm and the total width is 435 and 496 µm for transistors in circuits with a common-source and common-gate respectively. Topologically devices are divided into eight parallel connected transistors, each of which contains 8 and 10 parallel channels, 6.8 and 6.2 µm long, respectively. This design was developed to minimize the noise figure. The integrated structure of the MOS-transistor manufactured using CMOS SOI process is shown in Fig.1.
The device was designed in Cadence Virtuoso and Agilent GoldenGate CAD using the models included in the set of design tools. Electric diagram of LNA is shown in Fig.2. In the next stage of design the topology of microwave LNA was developed (Fig.3).
EXPERIMENTAL STUDY
OF CHARACTERISTICS OF LNA
Experimental samples were manufactured by Mikron. Fig.4 shows the comparison of simulation results of S-parameters of LNA in GoldenGate CAD using the models built into a set of design tools and experimental data obtained in the measurement on the Cascade probe station using Agilent vector network analyzer.
The diagram of the S21 parameter does not contain significant irregularities in the considered range, and curves S11 and S12 do not contain emissions in the form of peaks and intermodulation distortions. Discrepancy regarding the measurement and modeling suggests that the used physical-mathematical models are of limited usefulness for the design of microwave devices, and more accurate modeling requires refinement of high-frequency parameters of the models.
The results of measurements of the frequency dependence of the noise figure of LNA are shown in Fig.5. The noise factor is consistent with the theoretical expectations. The simulation results of the noise factor are not presented, due to the fact that existing SPICE models of transistors do not include characterization of noise parameters.
The measured current consumption of low noise amplifier is 26 mA.
Interest in the development of MMIC of broadband LNA is supported by the opportunity to create IP core on a single chip, as well as by the economic feasibility for large-scale application in the production of identical products. For comparison, the main parameters of the analogues developed by other technologies were considered (see table).
Designed LNA can be used as an IP core for L-band transceivers.
CONCLUSION
LNA MMIC based on 0.18 µm SOI technology is designed and manufactured. The gain is at least of 11 dB in the frequency range from 500 MHz to 1.5 GHz, the noise figure is of 4 dB.
According to the obtained characteristics, the designed LNA inferior to similar devices built on a GaAs, however, it should be noted that the device is manufactured using domestic commercial CMOS SOI technology without adjustments of the process. This means that you can use this LNA as IP core in the complex device such as a transceiver that includes both a microwave analog devices and digital signal processing circuits. This will significantly reduce the cost of end products as well as its weight and dimensions.
It should be noted that the task of the creation of a library containing characterized IP cores, which are similar to developed LNA, is urgent. This will greatly shorten the development time of complex devices under the requirements of the customer. ■
The project was supported by the Ministry of education and science of the Russian Federation in the framework of the Federal Targeted Programme for Research and Development in Priority Areas of Development of the Russian Scientific and Technological Complex for 2014 – 2020 according to the agreement No. 14.579.21.0072 dated November 24, 2014 (unique identifier of applied research RFMEFI57914X0072).
Nanoindustry. Issue #1/2017
Readers feedback
Leave a feedback