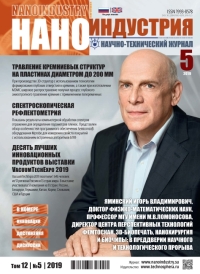 United team of scientists is focused on developing of methods and equipment for bionanoscopy
and medical applications based on use of the scanning probe microscopy. One of the first researches dealing with biology was an investigation of differences in cell wall morphology of the initial and genetically modified bacteria.

A scanning probe microscope plays the key role not only in research of viruses [8, 9] but also in practical work on early detection of viral particles [10, 11] and bacterial cell [12, 13] in liquids and air. Unique information was obtained in the studies of biomacromolecules: DNA [14, 15], RNA [16, 17], proteins [18], bacteria [19], viruses [20, 21] and their complexes [22]. Research of vital cells by SPM method [23, 24, 25] is in focus of the modern medicine. While observing biomacromolecules and cells, it is critically important to have not just the sample application methods but also selection and preparation of the appropriate optimal substrate for immobilizing DNA [26, 27, 28, 29, 30], proteins [31, 32] and cells. Nanostructured surfaces may present a special interest for designing biosensors [33, 34]. The main advantage of scanning probe microscopy is the ability to observe the processes in nature: growth of protein crystals [35, 36, 37, 38], aggregation [39] and protein segmentation [40], conformational changes in DNA [41, 42] and their complexes [43].

Advanced Technologies Center [44, 45] as a reliable industrial partner of the scientific team has helped to solve many scientific, technical and technological problems for scientists as soon as it was possible. The progress of the team was largely ensured by availability of original developments at the Advanced Technologies Center such as various models of the scanning probe microscopes: Scan-7 and Scan-8, FemtoScan, FemtoScan X and FemtoScan XI. FemtoScan became the world’s first scanning probe microscopes with full control of all measurement modes via the Internet.

FemtoScan X implements ultrafast measurement modes at 1 MHz frequency. The FemtoScan XI microscope integrates scanning capillary microscopy and molecular 3D printer modes.
The head of the united team focused on scanning probe microscopy, Professor Igor Yaminsky, is the author and co-author of many original publications in NANOINDUSTRY journal. He is also the scientific guide of the Nanotechnology Youth Creativity Centre, whose work was repeatedly reflected in the publications. This year, the Centre for Nanotechnology of Physical Department and the Bionanoscopy Centre of Chemical Department of Moscow State University launched a research support program in the following areas:
Scanning probe microscopy for biomedicine;
Development of quantum computers elements;
Molecular 3D printing;
Modern material science;
Tools and materials for experimental nanotechnologies.

Pupils and members of the team achieved great scientific results and their activities were recognized with high awards:
■ Akhmetova A.I., Meshkov G.B., Sinitsyna O.V. – were awarded with gold medals of the International Biotechnology Forum "RosBioTech" (2016, 2018);
■ Kiseleva O.I. – was granted Fellowship of UNESCO’s L’OREAL-UNESCO project "For Women in Science" (2007);
■ Obraztsova E.A. – was granted Fellowship of UNESCO’s L’OREAL-UNESCO project "For Women in Science" (2010);
■ Dubrovin E.V. – Laureate of the competition "Grant of Moscow – 2001" in the field of natural sciences (2001); winner of the "Grant – Moscow-2005" competition in the field of science and technology in the field of education, Soros student (2001), awarded the Gold Medal at the competition of young scientists of the Moscow international conference "Biotechnology and Medicine" (2006), winner of the European Academy Award (2009), scholarship of the President of the Russian Federation (2004, 2005), Grant of the President of the Russian Federation for young scientists – candidates of sciences (2010,2011);
■ Gallyamov M.O. – Fellow of the Humboldt Foundation (2003, 2004), Laureate of the Prize in the name of I.I.Shuvalov (2011);
■ Menshikov E.A. – The first RUSNANO award for the best work in the field of nanotechnology (2008), the prize of Tokyo Boeki (2009);
■ Bagrov D.V. – The main prize of Dow Chemical (2007) for the best student work;
■ Bolshakova A.V., Meshkov G.B., Sinitsyna O.V. – Deripaska Foundation Award for describing the work of a laboratory workshop;
■ Dobrinin A.A., Shram­­ko E.S. – Silver medal of the All-Russian Exhibition Center for the best development, "Modern Educational Environment" Exhibition (2004).

Over the past 10 years, a united team of scanning probe microscopy has carried out a number of major projects. Among them is a project supported by RUSNANO JSC to expand production of analytical instruments for research in materials science, biology and medicine. All work of a total budget of RUB 390 million was completed ahead of schedule [46]. At the request of LG Electronics in 2012–2015, studies were carried out to develop highly sensitive cantilever biosensors. In 2018 and 2019 seventeen multifunctional scanning probe microscopes were delivered to leading scientific and educational centers, including 14 of them to the Quantoriums of the Skolkovo Innovation Centre and Korolev [47]. Last year the FemtoScan scanning probe microscope received a Grand Prix and a gold medal at the RosBioTech-2018 international forum and exhibition. Currently, the work of the combined scanning probe microscopy team is supported by the Russian Federal Property Fund (projects No. 17-52-560001, No. 16-29-06290), the Fund for the Promotion of Innovations and the Department of Innovation and Entrepreneurship of the City of Moscow. ■
Nanoindustry. Issue #5/2019
Readers feedback
Leave a feedback