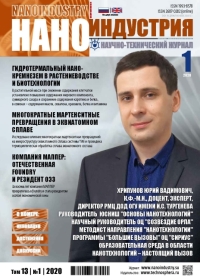 The paper describes in detail a study dealing with the influence of multiple martensite transformations on the equiatomic alloy of the TiNi system microstructure. Thermocyclic treatment of the equiatomic alloy in the nanocrystalline state obtained by the intensive torsional plastic deformation method was carried out.

However, the studies were primarily carried out using coarse-grained state alloys or the slightly deformed alloys and there is a limited number of research of the accumulating dislocations processes and changes of properties at thermocycling of the TiNi alloys in UFG and NC states.

Hardening of alloys in homogeneous region (from 800 °С) with water has been carried out in order to form the solid solution based on TiNi and erase a memory of the material. The average grain size is 200±5 µ.

In this paper the initial hardened samples with a thickness of h0 = 1,1 mm were subjected to intensive plastic torsional deformation in dies "with trenches" (0.6 mm deep, dia. 20 mm) at a pressure P = 6 GPa n = 2.5.

Thermocycling of the samples in various initial states was carried out by sequential dipping into liquid nitrogen (–196 °С) with subsequent heating up to 150 °С that is surely lower and higher of the Mк direct and Aк opposite martensite transformation temperatures. The number of thermal cycles "heating-cooling" ranged from 0 to 100. Cross-sectional thickness of the samples being thermally cycled was less than 1 mm, which provided for their rapid heating and cooling.

Curing time at heating and cooling temperatures equaled 5 min in order to provide complete heating/cooling of the samples. Quantitative and qualitative analysis of the initial TiNi alloys structure was carried out with the aid of an "OLYMPUS GX51" metallographic microscope. To reveal the microstructure, the etching solution of the following composition: 60%Н2О + 35%НNO3 + 5%HF was used. The structural element sizes were estimated using the random linear intercept method.

The X-ray line widths ((110), (200), (211), (220)) of B2-austenite were measured in the middle of X-ray roentgen peak of the diffraction patterns obtained at high temperatures. The main parameters of the structure (coherent scattering region (CSR), standard microdistortions (<ε2>)) were determined using MAUD software with the Rietveld method. The dislocations density was calculated by processing the data of X-ray structural analysis using MatLab software. The structure and substructure were studied at room temperature by the transmission electronic microscopy (TEM) on a JEOL JEM-2100 transmission microscope with an accelerating voltage of 200 kV.

RESULTS
Intensive torsional plastic deformation (ITPD) of Ti50,0Ni50,0 alloy leads to formation of an amorphous-crystalline structure with high proportion of the amorphous phase, which is confirmed by TEM photographs and the corresponding microelectron diffraction pattern (see Fig.1, a, b). It is necessary to conduct annealing at 350 °С during 1 hour to obtain a nano-crystalline structure. Annealing at 350 °C leads to almost complete crystallization of the amorphous phase and makes it possible to create an NC structure. The average size of B2-phase crystallites is about 34±5 nm. Fig.2 presents the light-field and dark-field TEM photographs of the fine structure of the alloy and the micro-diffraction pattern with distributed point reflexes along concentric rings. It is known that reducing of grain size to NC range in TiNi alloys significantly decreases the MT temperature. This fact explains the austenitic character of Ti50,0Ni50,0 alloy in an NC state [27–30]. Formation of the I-st type (001)B19' nanotwins of 3±1 nm width in B2-nanocrystallites of 29±3 nm size (see Fig.3, c) was observed at thermocycling of Ti50,0Ni50,0 alloy in the temperature range of MT with n = 100 cycles. Fig.3 shows an enlarged area A depicting the grains with internally formed (001) B19' nanotwins. Experimental data on the structural element sizes of the Ti50,0Ni50,0 alloy in various states are summarized in Table 1.

Based on the obtained results, we can conclude that at multiple thermal cycles in the temperature range of phase transformations with an increase in the number of thermocycles a slight change in grain size is observed. In the case when n = 100 the nanotwins of the I-st type (001) B19´ of several nanometers were found. Fig.4 shows the results of X-ray analysis of the alloy obtained at room temperature. NC state is represented by peaks from both B2 and the MT B19´ phases (see curve 1). The maximum intensity has the peak (110) of B2 phase. The peak at 44–45 ° corresponds to superimposition of two peaks of the martensite B19' phase [111 and 020]. The intensity growth from the B19' phase as a result of thermocycling reflects the increase of its volume fraction (curve 2). As at room temperature the alloy has a complex phase composition which makes it difficult to quantitavely analyse the analysis of structural parameters, the photography was performed at T = 150 °C when the material contains B2-phase only. The changes in peak width on X-ray patterns indicate NC and NC + TC states. In addition, a shift in the X-ray lines is noticeable, which can be caused either by oriented microstresses (voltage of the 2nd type) or by static distortions of the lattice, probably related to accumulation of dislocations or stabilization of martensite (Fig.4, b). The analysis of X-ray lines revealed that thermocycling leads to broadening of the peaks, accompanied by a decrease in intensity, indicating an increase in micro distortions, a decrease in the regions of coherent scattering, and accumulation of dislocations in the nanocrystalline state (Table 2).

Thus, X-ray diffraction analysis at high temperatures made it possible to quantitatively assess changes in the microstructure accumulated during multiple phase transformations, confirming the data obtained by transmission electron microscopy, at the same time, we note that the data on grain size (TEM) and CSR (SAR) values vary significantly, which is a known fact for deformed materials.

DISCUSSION
Thus, the effect of thermocycling on the structure under the influence of multiple thermal changes in the structure of the Ti50.0Ni50.0 alloy was considered for the nanocrystalline state to preserve the grain size within 30–35 nm before and after the TC. In addition, it was found that with the maximum number of cycles, composite type I B19´ nanotwins (001) of several nanometers in size are formed to reduce the level of internal stresses.

CONCLUSIONS
Under the influence of thermal cycling according to the used regimes with fast heating and fast cooling and with an increase in the number of cycles to 100, a slight decrease in grain size occurs in the structure of the Ti50.0Ni50.0 alloy, which is due to increase in the dislocation density in the TCs that limit the movement of interphase, intergranular and twin boundaries. It was found that at the maximum number of cycles (n = 100), composite nanotwins (001) B19´ of several nanometers in size are formed. ■
Nanoindustry. Issue #1/2020
Readers feedback
Leave a feedback