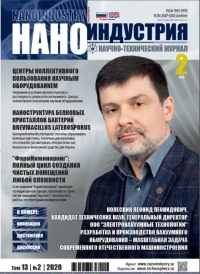 The article provides information about bacterium Brevibacillus laterosporus capable to form protein crystals, toxic to some insects, which allows us to consider these crystals as safe and environmentally friendly product in the fight against mosquitoes. A fine structure of protein crystals was studied and experimental data of the electron microscopy images were obtained.

INTRODUCTION
Currently, due to prevalence of the diseases transmitted by dipterans, special attention is paid to biological methods of combating the use of entomopathogenic bacteria, mainly Bac. thuringiensis (Bt). The main contribution to the development of the infection process in insects during Bt infection is made by crystalline protein δ-endotoxin, synthesized during sporulation [1]. Protein crystals of endotoxin are formed simultaneously with spores by one or two in each bacterial cell. They are toxic to insects of Lepidoptera, Diptera and Coleoptera orders.

The ability to produce protein crystals in bacteria Brevibacillus laterosporus (Bl) has not been established until recently. Bacilli Bl, in contrast to Bt, are poorly studied entomopathogenic bacteria. Their distinctive feature is the presence of a canoe-like inclusion attached to the spore. Earlier, we obtained and characterized Bl strains capable to form the parasporal crystals [2]. In the studied Bl strains it was possible to detect the crystalline inclusions that differ in shape and size, similar to those described for the entomopathogenic bacteria Bt and B. sphaericus [3]. Bl crystals possess mosquitocidal properties (toxic for dipterans), which are important due to a possibility of their practical use in case of the development of resistance in mosquito larvae to existing BT-based insecticides [4]. Bl crystals have been poorly studied. Their conservation in the environment and the manifestation of toxicity in the host organism are dependent on the physical and chemical properties according to their structural organization.

Earlier various microscopic methods have been used to study spores and crystals of native B. laterosporus cells. Using atomic force microscopy, a three-dimensional image of spores was obtained [6]. A view of the native canoe makes it possible to evaluate its position in relation to the spore. However, the crystals were not sufficiently characterized. In this work we obtained data on the ultrastructural organization of the B. laterosporus crystals.

MATERIALS AND RESEARCH METHODS
Strains Bl were obtained from the laboratory collection of the All-Russian Research Institute of Genetics (Bl 16-92) and the collection of the Pasteur Institute (Paris) by Dr. Lecadet (Lat 006). Strains were grown on NBY agar medium for 72 hours at 30 °C.

Electron microscopy. Spores and crystals were washed off agar, suspended, washed in distilled water, and examined using ultrathin sections and negative contrast [2]. A suspension of spores and crystals for studying by the method of negative contrasting was applied to grids coated with a carbon film and stained with a NANOWtm phosphoric-tungsten acid contrast. The structure of the samples was studied using electron microscopes JEM-100B and LEO912AB (Zeiss). The lattice parameters of the BL 16-92 crystal were determined from the obtained diffraction pattern using a LEO912AB transmission electron microscope (Zeiss).

RESULTS
In strains Bl 16-92, Lat 006 crystalline inclusions were found that differ in shape and size. Fig.1a, b and Fig.2a, b show the data obtained by studying ultra-thin sections of these strains. The crystals are clearly visible in sections of sporulating cells. In strain Bl 16-92 the crystals mainly have a rhomboid shape (Fig.1a, b). In strain Lat 006 the crystals have a cubic shape (Fig.2a) or an elongated shape with rounded ends (Fig.2b). The crystals are surrounded by a mesh shell of uniform thickness, which is especially clearly visible in strain Bl 16-92 (Fig.1a).
With negative contrast, the rhombic crystals with clearly defined angles, mainly 0.4 × 0.3 μm, are also visible in strain Bl 16-92. Strain Lat 006 has rectangular crystalline inclusions of size 0.2 × 0.7 μm or square crystals with smoothed corners of size 0.4 × 0.4 μm or less. Crystals of less regular shape are occur from time to time.

Crystals of strain Lat 006 differ from crystals of strain Bl 16-92 not only in shape but also in higher electron density. However, they are similar to Bl 16-92 crystals by presence of a shell that isolates them from the influence of environmental factors.
With negative contrasting, the electron-dense Lat 006 crystals are especially clearly detected (Figs.3, 4, 5).

For comparison, we previously studied the insecticidal crystals of Bt var. galleriae with the method of negative contrast, toxic to lepidopteran insects, and a parallel striation of the crystal surface with a period of about 20 nm was found [5]. The same method was applied for studying Bt var. israelensis crystals that possess mosquitocidal activity. Electron microscopy of these crystals, negatively stained with 2% ammonium molybdate, showed a lattice of frequent transverse lines with a period of 7 nm on the surface. In the crystals toxic to dipterans, it was not possible to reveal the striation characteristic of crystals toxic to lepidopterans.

The projection image of a single crystal of B. laterosporus Lat 006 cells obtained with a LEO 912AB transmission electron microscope is shown in Fig.7.

CONCLUSIONS
In this work we obtained data on the ultrastructural organization of B. laterosporus crystals. Their structure turned out to be similar in size to the crystal lattice with Bt var. israelensis crystals toxic to mosquito larvae. Regardless of the type of bacillus, the structural features of crystals are probably more determined by the properties of the object of their insecticidal action.

The characteristic packing size of proteins in B. Laterosporus crystals is about 4.5 nm. Crystal sizes vary between 50–700 nm. In this case, a cubic crystal with a facet of 250 nm contains about 170 thousand protein subunits. ■
Nanoindustry. Issue #2/2020
Readers feedback
Leave a feedback