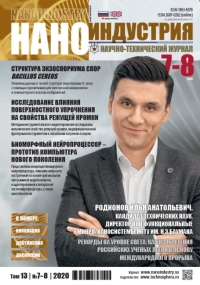 In the environment B. cereus bacilli are adapted to the saprophytic lifestyle. Under certain conditions, they can become pathogens for humans and animals. The interest in B. cereus bacilli is due to the fact that they cause diseases of the gastrointestinal tract (GIT), and can also cause septicemia, endocarditis, pneumonia, meningitis, etc. An important stage in the life cycle of B. cereus is sporulation. B. cereus sporules have specific structures that are absent in vegetative cells, and are responsible for such sporule properties as thermal stability, resistance to various damaging factors, adhesion to biotic and abiotic surfaces. The data on the fine structure of the B. cerеus exosporium were obtained using transmission electron microscopy and computer image analysis.

In the environment B. cereus bacilli are adapted to the saprophytic lifestyle. Under certain conditions, they can become pathogens for humans and animals. The interest in B. cereus bacilli is due to the fact that they cause diseases of the gastrointestinal tract (GIT), and can also cause septicemia, endocarditis, pneumonia, meningitis, etc. An important stage in the life cycle of B. cereus is sporulation. B. cereus sporules have specific structures that are absent in vegetative cells, and are responsible for such sporule properties as thermal stability, resistance to various damaging factors, adhesion to biotic and abiotic surfaces. The data on the fine structure of the B. cerеus exosporium were obtained using transmission electron microscopy and computer image analysis.
Теги:   exosporium   microelectronics   transmission electron microscopy   в. cereus   просвечивающая электронная микроскопия   экзоспориум
Structure of the bacillus cereus sporules exosporium


INTRODUCTION
Spore-specific structures include exosporium, sporule membrane, the coat of spore, the cortex, the inner membrane of the spore, and the cervix. In a number of bacteria core, an exosporium is formed outside the shell and its structure is specific coat to various species. B. cereus is characterized by the exosporium in the form of an outer thin sheath surrounding the sporule [1]. The exosporium spore comes into direct contact with external environment, in contrast to deeper structures. Exosporium plays a role in resistance, adhesion, sporule proliferation, host diffusion of spores, and germination control. Exosporium has a complicated chemical composition, it contains protein (∼52%), lipids and polysaccharides [2].
The B. cereus exosporium has characteristic logg appendages that have a similar chemical composition and common antigens.

Earlier, in order to determine the packing parameters of morphological subunits in the B. thuringiensis exosporium, bacilli from the B. cereus group, we analyzed electron microscopic images by optical diffraction [4]. Processing of electron microscopic images using optical diffraction was carried out for objects with a periodic structure. Optical diffraction and filtering techniques are used to obtain accurate information about the structure of regular layers. The image of exosporium on electron microscopic shots is the result of superposition of its upper and lower layers. The diffractogram of exosporium detected were six double reflections, the angle between them was 9°, which indicates presence of two layers with hexagonal periodicity, displaced relative to each other by 9°. On the filtered image of the B. thuringiensis exosporium, we obtained averaged morphological units with holes in the centre, which is consistent with the concept of exosporium as a porous structure.

According to Ball et al. [5], the exosporium of B. cereus has pores 23–34 Å in size. The authors concluded that the exosporium is a semipermeable barrier that allows penetration of germination triggers to alanine or inosine, but not to hydrolytic enzymes and antibodies.

The ultrastructure of the exosporium contributes to performance of the protective function due to the selective ability to pass low molecular weight substances and retain high molecular weight ones.

Spores can vary in the size of exosporium. It turned out that the adhesive ability of the sporules varies from strain to strain. The most actively contaminated surfaces are spores with a small exosporium [6]. Disputes on such properties as adhesiveness and resistance to damaging environmental factors are dangerous for the food industry and medicine. To assess their ability to contaminate food industry equipment and medical instruments, it is interesting to study the external structures of spores (exosporium and appendages) in B. cereus strains of various origins. Analysis of the surface structure of spores is also important for choosing a method for combating spore-forming bacteria.

The aim of this study is the ultra-structural analysis of the external spore structures (exosporium) of various B. cereus strains by electron microscopy, optical diffraction and filtration. The study results are important for understanding the role of the ecological niche occupied by B. cereus strains in the formation of their phenotypic properties. The ability of B. cereus to occupy a variety of ecological niches and survive in extreme conditions is known, which can lead to undesirable consequences for humans and animals.

After 96 hours of cultivation, bacteria were washed off from a dense nutrient medium, rinsed with distilled water, and fixed with formalin. To study spores by negative contrasting, a sporule suspension was applied to copper grids covered with a formvar film and stained with 1% aqueous solution of uranyl acetate or 2% aqueous solution of ammonium molybdate.
To obtain ultrathin sections, the samples were fixed using the Ito-Karnovski method [7]. Then the material was fixed in 1% OsO4 solution in 0.2 M cacodylate buffer and in 1% uranyl acetate solution in 0.2 M maleate buffer. The material was dehydrated in alcohols with concentrations of 50°, 70°, 96°, 100°. Then it was placed in a mixture of 100° alcohol with LR White resin, and then in pure LR White resin. The material was transferred into gelatin capsules, which were placed in a thermostat at 56 °C. Ultrathin sections were prepared on an LKB III ultratome (LKB Bromma, Sweden) and contrasted with 1% uranyl acetate solution in 70° alcohol and lead citrate. Negatively stained spores and sections were studied using a JEM 2100 electron microscope (Jeol, Japan) at an accelerating voltage of 160 kV.

CONCLUSIONS
An electron microscopic study of the spores of strains of both clinical isolates and natural strains of B. cereus was carried out using negative contrast and ultrathin sections. Ultrathin sections (Fig.1) show mature spores of strain 239 isolated from the blood of a patient with UC with an ultrastructure characteristic of B. cereus. On transverse sections, an exosporium is observed in the form of a thin wavy line, an exospore space separating the exosporium space from the spore electron-dense shell, an electron-transparent coat, and a core in the center of the spore. These results provide an overview of the structure of the B. cereus spore. All studied strains had a similar ultrastructure.

However, when studying sections, it is not possible to consider the fine structure of the exosporium. In order to visualize the exosporium, the negative contrasting method was used. Figure 2 shows a spore of strain 8035 enclosed in an electron-transparent exosporium with appendages. Similar data were obtained when studying all the strains. Figure 3 shows a fragment of an exosporium of the same strain with a hexagonal packing of subunits.

In Figures 4d and 5, a moire change in the observed contrast of the hexagonal packing of exosporium layers is noticeable. In fact, the image shows the superposition of two layers of the exosporium – upper and lower, rotated relative to each other at a small angle. According to the section shown in Fig.5, the observed characteristic gap between the pores of one layer of the exosporium is about 6 nm.

Thus, using transmission electron microscopy and computer analysis of images, data on the fine structure of the B. cerеus exosporium were obtained. Fragments of the exosporium after Fourier filtering are presented, demonstrating a noise-free hexagonal structure characteristic of B. cerеus. ■