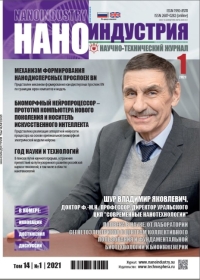 This paper considers formation of PCh13M2-BN powder compact structure obtained by solid-phase sintering. The mechanism of the formation of nanodispersed BN interlayers along the grain boundaries of compacts and a phenomenological model of the formation of regions with the increased concentration of ceramic particles in the bulk of the material are presented.

This paper considers formation of PCh13M2-BN powder compact structure obtained by solid-phase sintering. The mechanism of the formation of nanodispersed BN interlayers along the grain boundaries of compacts and a phenomenological model of the formation of regions with the increased concentration of ceramic particles in the bulk of the material are presented.
Теги:   abrasion   cermet composite material   microstructure   nanodispersed interlayers   истираемость   металлокерамический композиционный материал   микроструктура   нанодисперсные прослойки
MECHANISM OF FORMATION OF NANODISPERSED BORON NITRIDE LAYERS IN PKH13M2-BN POWDER COMPACTS


This paper considers formation of PCh13M2-BN powder compact structure obtained by solid-phase sintering. The mechanism of the formation of nanodispersed BN interlayers along the grain boundaries of compacts and a phenomenological model of the formation of regions with the increased concentration of ceramic particles in the bulk of the material are presented.

INTRODUCTION
The higher reliability, stability and efficiency of steam turbines of various capacities are inextricably linked with the types of seals used in their designs [1, 2]. The accumulated world experience in operation of steam turbines with honeycomb and brush seals and seals applied by thermal spraying indicates the need to develop a new class of abrasive metal-based materials with dispersed additives of compounds belonging to the category of solid lubricants (MoS2, BaF2, CaF2, h-BN and others ) [3–10]. At the same time, the most promising approach for the uniform introduction of dispersed additives into the volume of the formed products is the use of powder metallurgy technology. Of the whole variety of non-metallic compounds related to solid lubricants, h-BN possesses good lubricity under conditions of high humidity and a possibility of application in the temperature range up to 700 °C [11, 12].

Known are the works [13–18] where the authors evaluated the effect of concentration of hexagonal boron nitride on the mechanical and tribological properties of composite materials on different bases. It has been established that the introduction of boron nitride into the composition of materials leads to decreasing of friction at high loads and speeds [13–15, 17], h-BN has a low adhesive relationship with the matrix [15], its lubricity is lower than that of graphite, due to the higher van der Waals force between the layers of the crystal lattice [16, 18]. A number of works [1, 19] provide information on achievement of a unique combination of mechanical and operational properties of composite materials with boron nitride additives, allowing them to be considered as a sealant for the flow path of steam turbines.
However, the formation of the composite material structure with h-BN additives and its relationship with the performance properties remain not fully understood and are the subject of discussion among scientists.

The original powder components were put together and thoroughly mixed. The mixing time of the compositions was determined empirically from the condition of the uniform distribution of the components over the volume of the charge. The resulting powder mixture was cold pressed into rectangular shapes of 50 × 10 × 10 mm. The compacts were sintered in electric furnaces in air at a temperature of 1,200 °C. The sintering time was 2 hours.

RESULTS
Figure 1 illustrates the microstructure of composite compacts with different contents of boron nitride. Pores of various shapes and sizes are observed on the polished surface of all studied samples. In the structure of a compact without boron nitride (Fig.1a), the pores have a globular shape and are predominantly located along the grain boundaries which indicates that the applied force during pressing is insufficient for the formation of a denser structure, due to appearance of a large friction force between metal particles and, as a consequence, the limited flow of diffusion processes during subsequent sintering.
The addition of boron nitride into the initial charge leads to the formation of extended grain-boundary pores in the microstructure (Fig.1b, c, d), and the higher the boron nitride content, the larger the volume fraction and pore size. The mechanism of formation of the observed extended grain-boundary pores differs from the classical concept described in [20–23]. Due to the different bulk density of the ПХ13М2 metal powder and boron nitride, the volume of the mixed components in the charge is comparable. Taking it into account, together with the chemical inertness and low adhesion of boron nitride, it can be assumed that the extended grain-boundary pores observed in the microstructure represent the areas with an increased concentration of solid lubricant, which is removed together with the abrasive when preparing the object of study for metallographic analysis. An increase in the volume fraction of pores with an increase in the boron nitride content in the composition of the initial charge from 0 to 6% by weight is from 3.5% to 17%, respectively.

The studies of the microstructure of compacts with different contents of boron nitride at higher magnification performed in the phase contrast mode revealed a presence of dispersed nanosized 20...200 nm thick boron nitride interlayers along the grain boundaries (Fig.2). Moreover, a pronounced fragmentation of h-BN particles in separate grain boundaries is observed (Fig.2c). In addition, h-BN particles are also observed in the body of metal grains formed during sintering.
The discovered structural features of compacts with the introduction of h-BN into the initial powder mixture indicate the development of diffusion mass transfer between metal particles during sintering that occurs by various mechanisms.

DISCUSSIONS
The data obtained on the change in the microstructure of compacts with an increase in the boron nitride content allow us to consider the issue of its formation, having previously divided the task into 2 components: 1 – the effect of deformation during pressing, 2 – the effect of high temperature at sintering.

Figure 3 illustrates a phenomenological model of the effect of deformation on the structure formation of compacts. Due to their natural inertness, the boron nitride particles have low adhesion ability [24] and cannot react with the ПХ13М2 metal powder. While pressing, a part of the uniformly distributed h-BN particles in the volume of the charge has a "lubricating effect", contributing to a tighter adhesion of the metal powder particles to each other. At the same time, boron nitride particles under conditions of gradual compaction of the material are partially subject to either direct rapid displacement into the more free zones of reduced density, where the development of deformation processes did not begin due to insufficient applied force or to the gradual slow displacement due to destruction of the relationship of the extreme layers bordering with metal particles (separation of boron nitride particles (Fig.4)). Ultimately, the directed motion of boron nitride particles during pressing leads to the formation of closed grain-boundary porosity in the volume of compacts filled with h-BN particles (regions with an increased concentration of h-BN). In this case, the higher the boron nitride content in the initial charge, the greater the volume fraction of the grain boundary pores.

During sintering the structure is formed according to the model described in [25]. At the interfaces where there are point contacts of metal particles with each other or where the nitride layer thickness is so small that due to thermal expansion of the ПХ13М2 powder they may come into contact with each other, the diffusion mass transfer processes develop, the sintering bridges are formed and metal particles merge with the larger grain formation. In this case, a partial absorption of h-BN particles by growing metal grains is possible (Figs.2 and 5b). At the interfaces with a high content of ceramic particles and in the areas with an increased concentration of boron nitride, the development of the mass transfer processes of and recrystallization is blocked. As a result, weakened boundaries are created in the volume of compacts, which cause high abrasion rates [1, 19].

Thus, the addition of a finely dispersed boron nitride powder into the composition of the initial charge makes it possible to control the strength properties of grain boundaries formed during sintering by blocking the development of diffusion processes while sintering, and, as a consequence, to achieve the combination of strength and abrasion properties of the composite material ПХ13М2-BN required by operating conditions.

CONCLUSIONS
Addition of finely dispersed h-BN with a graphite-like structure into the composition of powder compacts ПХ13М2 leads to formation of an extended closed grain-boundary porosity filled with boron nitride particles during deformation.

Deformation treatment of the initial charge of powder compacts ПХ13М2-BN leads to the formation of dispersed nanosized 20...200 nm thick boron nitride interlayers along the grain boundaries due to partial stratification of h-BN particles.
In the course of sintering, due to the development of diffusion mass transfer processes, a partial absorption of dispersed h-BN particles by growing metal grains takes place. ■
The research was carried out using the equipment of the Nanotech Center for Collective Use of the USATU.
Nanoindustry. Issue #1/2021
Readers feedback
Leave a feedback