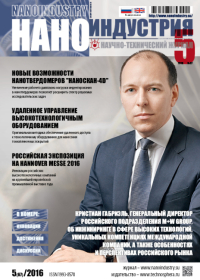 The application of the new module for expansion the load range at measurement of hardness by indentation with use of NanoScan-4D scanning nano-hardness tester is shown.
The device increases the range of applied forces
from 1 to 50 newton.

Issue #5/2016 M.Butyuto, A.Rusakov, K.Kravchuk, A.Useinov, I.Maslenikov
Expansion load range of indentation in NanoScan-4D scanning nano-hardness tester
The application of the new module for expansion the load range at measurement of hardness by indentation with use of NanoScan-4D scanning nano-hardness tester is shown.
The device increases the range of applied forces
from 1 to 50 newton.
Теги:   mechanical properties   nanoindentation   scanning nano-hardness tester   механические свойства   наноиндентирование   сканирующий нанотвердомер
The study of mechanical properties of materials with nanometer spatial resolution is no longer a highly specialized task. Nanotechnology is firmly entrenched in many areas of human activity: science, medicine, engineering, etc. The improvement of materials and technologies for nanoindustry entails a corresponding development of measuring devices that are required by not only large research centers, but also by small laboratories and factories. Increasingly stringent requirements are imposed for the accuracy, reliability, quality of production and, of course, functionality of the equipment. Users are increasingly faced with the task of research quite different materials: from flexible to super hard. And measurements can be performed outside the nanoscale.
Of course, for simplicity and convenience, it is advisable to have one universal device that can implement a large number of measuring methods in different ranges of applied loads and displacements than to maintain multiple highly specialized devices having different user interfaces and software for data processing. Thus, the expansion of the functionality of measuring systems by increasing in the number of implemented methods and expanding the range of applicability is one of the priority trends of development in analytical instrument engineering.

An example of modern domestic measuring device is NanoScan-4D scanning nano-hardness tester (Fig.1), which is developed by Technological Institute for Superhard and Novel Carbon Materials (TISNCM) and allows more than 30 measurement methods for physical-mechanical properties, from basic measurement of hardness and elastic modulus by instrumental indentation methods [1] and scratching (sclerometry) [2], to "exotic" strength testing of micro-objects using flat punch [3] and dynamic measurements of stiffness [4]. The ability to use a large number of measuring techniques allows to study a wide variety of objects from thin films to complex multilayer coatings whose structure is characterized by significant spatial inhomogeneity of mechanical properties [5].
Modular design of NanoScan-4D scanning nano-hardness tester allows to equip each device according to the specific needs of the user. If the solution for narrow range of tasks is required, then it is possible to use the device in the minimum configuration, for example for quality control in the manufacturing of a limited range of products. At the same time, there is always an opportunity to expand the functionality of each device, if such a need arises during operation. This flexible approach to system design significantly reduces the cost of measuring equipment.
Standard maximum load applied to the sample during indentation in NanoScan-4D devices is 1 newton. This is sufficient for measurement of physical and mechanical properties at the nanoscale, but testing of materials in classical micro range requires the ability to indent with a larger applied force [6]. The indentation in the micro range using the Vickers indenter allows to directly compare the properties of materials with reference parameters of HV hardness. Indentation with high loads allows to measure properties of bulk materials without affect of the surface layer. This can be useful for comparison of the properties of the substrate and thin coating on the surface or when the surface layer is broken by rough grinding or surface oxidation. The increased load contributes to a change in mode of deformation from elastic to plastic and from plastic to brittle, and allows to measure the fracture strength of a larger number of materials [7].
Taking into account the above, the TISNCM develops a new module that extends the range of the applied indentation load up to 50 newton. The device is mounted directly on indentation module of NanoScan-4D for expansion of his capabilities. An important advantage is that the new module does not reduce the functionality of the scanning nano-hardness tester and allows to implement all methods of measuring, applying, if necessary, large loads. It is important that the measurements in the different ranges of load can be performed without replacement of the indenter and calibrations. The simplicity of the design allows the upgrade of NanoScan-4D nano-hardness tester with new extension module directly at the place of operation by user without special skills.
An example of using the module for the application of heavy loads is illustrated in Fig.2, which shows the "load-introduction" curve for fused quartz and 40X13 steel with a maximum load of 50 newton.
Fig.3 shows the imprint on the steel and on the quartz, made by the Vickers indenter with a maximum load of 50 newton. The imprint on the quartz has a ring and radial cracks. Imprint on the steel is plastic with small mounds on the perimeter.
Thus, this paper shows one of the areas of development of the NanoScan-4D scanning nano-hardness tester, namely, the extension of its functionality by adding a new module. The new module makes it possible to measure mechanical properties by instrumental indentation with a maximum loading force of 50 newton. This increases the range of researches and in some cases allows to go beyond the nano level and reduces the number of necessary research devices. ■
Nanoindustry. Issue #5/2016
Readers feedback
Leave a feedback