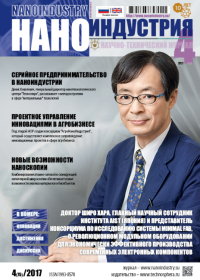 The component parts of the mechanisms having curved surfaces require strict shape control. To implement this operation, devices based on contact (probe) or non-contact (optical) methods can be used. In this paper, profiles of molds used in HPHT diamond growth were measured using the contact profilometry method implemented in NanoScan-4D scanning nanohardness tester.

Issue #4/2017 A.Useinov, I.Maslenikov, A.Rusakov, E.Gladkikh, B.Loginov, V.Loginov, A.Yelkin
Profile measurements of complex-shaped parts using scanning nanohardness tester
The component parts of the mechanisms having curved surfaces require strict shape control. To implement this operation, devices based on contact (probe) or non-contact (optical) methods can be used. In this paper, profiles of molds used in HPHT diamond growth were measured using the contact profilometry method implemented in NanoScan-4D scanning nanohardness tester.
Теги:   contour measuring machine   mold   nanohardness tester   profiling   контурограф   нанотвердомер   пресс-форма   профилирование
High precision of manufacturing of machine parts and mechanisms plays an important role in various fields of technology. Products the shape of which differs significantly from simple rectangular solids and solids of revolution (e.g., turbine blades) are widely used in engineering. At the same time, the optimal modes of operation of the mechanisms require the manufacture of parts with high degree of accuracy. In this regard, an engineering challenge of the shape control appears. This problem can be solved in different ways. In particular, papers [1, 2] propose analytical methods to test profile errors of the conjugate disk cams. Experimental verification of the models was performed by comparing the results of the analytical expressions with those obtained using contourograph. In the paper [3], on the basis of the contours obtained using a high-precision scanning profilometer, software was used to assess the accuracy of manufacture of parts of aircraft engines. All this studies would not have been possible without instruments for high-precision measurements of the shapes of the parts.

The surface profiles of the products can be measured in various ways, both contact and contactless. Contact methods include those that use probes that are in contact with the measured surface and are moved along it with the aid of motorized translators. Contourographs and profilometers belong to this class of devices. Non-contact methods of control of relief and surface roughness are implemented using optical profilometers [4]. Profilometers are the devices that provides data about the surface topography with accuracy of less than a micrometer that allows to calculate the roughness parameters. Historically, the first optical profilers were heterodyne interferometers followed by interferometers for measuring the phase shift and then by the devices that measure differential interference contrast. The operation of such devices is based on theoretical models of reflection of radiation from surfaces of various types (metals, dielectrics) [5].
Contact profiling can be applied both in macro- and microscales. Different sized probes can be used for measuring the surface topography. If the required measurement accuracy of lateral dimensions exceeding 10 nm, then the surface is studied with the help of a silicon cantilever with a small radius of curvature of the tip. However, in this case the measuring range in X(Y) axis is limited to hundreds of microns, and in the Z axis – to a few tens of microns. As it has been stated above, the task of quite another kind is actual in the industry, it is required to measure the shape of the part having the lateral dimensions of the order of several centimeters and a height difference of the same scale. In this case, it is advisable to use the device with a different scale metrological characteristics.
The contourographs are intended for measurement of roughness and profiles of different parts, both flat and solids of revolution. With their help it is possible to determine geometric parameters in the measured profiles: radiuses of arcs, coordinates of points, distances, angles, etc [6].
From the viewpoint of improving manufacturability, the devices providing diverse methods are a good alternative to traditional tools. For example, the NanoScan-4D scanning nanohardness tester (FSBI TISNCM, Russia) designed to measure the hardness and elastic modulus, thanks to the use of motorized translator and system for excitation of resonance oscillations of the indenter suspension system can perform profiling of the sample surface. In addition to data on the geometry and the linear dimensions of the part, combining of the functions of surface profiling and measurement of mechanical properties in one device helps to solve the problem of selection of measurement area, and to perform high-precision positioning of the indenter.
In this paper, we have measured the contour of a part of complex shape and have compared the experimental data with the results obtained using Model 220 contour measuring machine (Zavod PROTON, Russia) that is included in the State register of approved measuring instruments of the Russian Federation.
DESCRIPTION OF METHODOLOGY
The principle of operation of Model 220 contour measuring machine (Fig.1) is standard and based on the scanning of the irregularities of the measured surface by a special probe mounted on the console. Depending on the configuration of the measured area on the sample, the probes of length from 1 mm to 100 mm with radius of curvature of the tip 10 or 20 microns and tip angle from 30 to 60 degrees are used. The probe presses on the sample and a moveable load on the opposite end of the console allows to adjust the measuring force in the range from 1 to 200 mN. The console with the probe is moved in the horizontal plane by a linear electromechanical actuator to the length of up to 220 mm with an accuracy of 0.1 microns and a speed of 2 mm/s. Vertical mechanical oscillations of the probe during its movement on the measured surface are converted into a digital signal by the inductive sensor with an accuracy of up to 0.001 µm in the whole range from –60 mm to +60 mm of rising or lowering of the probe. Drive with a sensor console and probe moves vertically at 400 mm on a motorized stand for operation with samples of different size. The samples are fixed either on the coordinate table or in the spindle. The coordinate table allows to select the location on the sample to measure the profile and to obtain a three-dimensional image by measuring many profiles. The spindle thanks to the horizontal rotation axis allows to operate in the mode of roundness gage measuring the shape deviation of solid of revolution. The granite base of a motorized rack and the vibration-absorbing dampers reduce noise during the measurements. It is possible to work with samples weighing up to 60 kg. An accuracy of length measurement up to 0.1 µm, radius measurement up to 0.2 µm, angles measurement up to 0.1 degree and, at the same time, of the roughness Ra measurement in the range from 0.005 to 50 µm with an accuracy of up to 0.001 µm is metrologically provided.

A typical mode of operation of nanoindentors at profiling is scanning with constant force of pressure. This is an analogue of the contact mode in atomic force microscopes (AFM). Thanks to the high force resolution in force and to the effective vibration isolation system, a typical nanoindentor can scan the surface with the level of pressure in a few µN (typical value for devices like NanoScan-4D and Agilent G200 is from 5 to 10 µN). The use of the sensor of lateral forces in addition to such mode allows to obtain not only the profile of the surface topography, but also the coefficient of dry friction of the tip of the indenter on the surface of the material.
The measuring system of NanoScan-4D nanohardness tester (Fig.2) has a high natural frequency and due to the optimal resolution in force and displacement allows the profiling in the mode of resonant excitation, which is similar to tapping mode in AFM. During oscillations, it is necessary that the deviation of a needle was within the limits of the measuring range of the sensor. In contact mode, the deformation of the surface is inevitable, and tapping mode reduces the influence on the measured sample.
To reduce measurement time, a number of software algorithms for motion control depending on the degree of curvature of the surface (the speed increases when moving along flat surfaces) was developed. Change the speed of the sensor movement along the contours of the part affects the speed of reading data, that is, in places where the surface topography is changing most rapidly, a larger number of measurements is carried out.
The best results require the integrated processing and filtering data to convert the measurement results into information about the shape of the surface that is used in practice [7]. This problem is solved by software developed for NanoScan devices that adjusts the step of image of the surface (subtracting the slope) with the simultaneous filtering of a random individual data outliers.
CONDUCTED STUDY
A mold used for HPHT growth of synthetic diamonds in the high pressure chamber was selected as a test object for testing the capabilities of nanoindentor in measuring profiles. It have a fairly complex shape with hollows, the curvature radius of which must have a specified value. Exact compliance of the geometry is necessary for uniform distribution of pressure. Precision of parts with complex surface topography was measured by profiling in tapping mode. Data on the contour of the part and its deviation from a shape specified by the drawings was obtained.

NanoScan-4D scanning nanohardness tester, which was used in the present study for measuring the profiles, had a resonant frequency of the indenter suspension system of 80 Hz, a mass of the movable part of 30 g and a stiffness of the suspension system of 7 kN/m. The Q-factor of the indenter suspension system was equal to 30 at the minimum detectable displacement of 0.1 nm and the force detection threshold of 1 µN in the frequency range from 0.1 Hz to 1 Hz.
Control of pressure of the oscillated probe to the surface can be accomplished in two ways: by the change of amplitude and by the change of phase shift. Implementation of the mode of phase control of the shift of resonant frequency has been significantly improved the quality of the surface scan by NanoScan-4D, as it provides not only high speed but also is less susceptible to influence of various disturbing factors. The level of the average interaction force of the tip with the surface has been reduced by the order thanks to the dynamic control through the use of a resonant excitation mode of the sensor suspension system [8]. An optimal algorithm for measuring the phase shift upon contact with the surface, as well as the mode with most preferred amplitude of oscillation of the probe tip were determined.
Fig.3 shows a cross-sectional profile of scratch obtained with the help of the NanoScan-4D in a tapping mode with a constant phase shift of the oscillations [9].
Fig.4 presents the mold surface profiles obtained with the help of the NanoScan-4D (the oscillation amplitude of the probe tip of 100 nm, the force level of the interaction is less than 1 µN) and of Model 220 contour measuring machine.
CONCLUSION
The indisputable advantage of contact profilometers and contourographs from the point of view of controlling the shape, radiuses of curvature of the surfaces and the roughness parameters of various parts is high operation speed and the accuracy of the obtained data. At the same time, implementation of the profiling mode in NanoScan-4D nanohardness testers allows to combine in a single measuring complex such diverse techniques as the study of the mechanical characteristics (hardness and modulus of elasticity) and the recording with micrometer precision of the topography of the part. At the same time, in accordance with the results of experimental studies, profiles measured with use of two different devices match within the scatter of the linear dimensions of the measured object. It is also shown that in tapping mode of profiling, the most effective and responsive method of controlling contact of the probe and the sample surface for the specified characteristics of the oscillating system is a method of detecting a phase shift between exciting force and resulting oscillations. ■
Nanoindustry. Issue #4/2017
Readers feedback
Leave a feedback