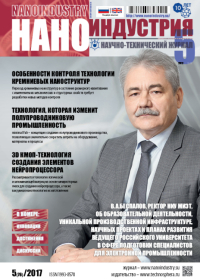 A seminar on the new Japanese minimal Fab technology was held at the National Research University of Electronic Technology (MIET).

Issue #5/2017 D.Gudilin
minimal Fab, look into future of semiconductor industry
A seminar on the new Japanese minimal Fab technology was held at the National Research University of Electronic Technology (MIET).
Minimal Fab is the concept of semiconductor production, which is based on the idea of a significant reduction in costs for equipment, materials and processes. For the development of minimal Fab with the support of the Japanese government, a consortium has been created, which includes leading technology companies of the country, including 31 large corporations and more than 140 medium and small enterprises.
BACKGROUND
Over the past decades, one of the trends in the development of the semiconductor industry has been the increase in the size of the wafers. Currently, the standard for large fabs are 300 mm wafers, but a further increase in the size of the substrates has encountered a number of problems. Among them are a sharp increase in capital investment, a decrease in efficiency and increased risks in the development of new devices. Research conducted by Dr. Sh. Hara's team showed that in modern megafabs, which are a symbol of progress in microelectronics, the rate of operation is 10–50%, and the share of useful costs does not exceed 10%. At the same time, up to 90% of the design cost is spent on correcting errors. Thus, the technological development of the industry has reached the stage when it is time to move to fundamentally new solutions. And minimal Fab can be one of them. PRINCIPLES AND ADVANTAGES
To increase the efficiency of the development and production of semiconductor devices, it is necessary to achieve a significant reduction in the cost of equipment and infrastructure, as well as operating costs while increasing the flexibility of process systems. As a solution, the developers of minimal Fab offered to reduce the size of the processed wafers by two orders of magnitude – down to 0.5 inches (12.5 mm). This reduces the dimensions and cost of process equipment, facilitates its maintenance, reduces production waste. If the cost of a conventional fab for 300 mm wafers is estimated at about 5–10 billion USD, then the cost of minimal Fab with the same functionality will not exceed 5–10 million USD, that is, the difference will reach 1000 times.

The second important idea, which formed the basis of minimal Fab, was the localization of a clean environment inside the equipment. To do this, the wafer is placed in a sealed container, in which it is transported between process operations, and the equipment itself can be operated outside cleanrooms, which drastically reduces the costs of the production infrastructure.
minimal Fab refutes the common stereotype, according to which the cost reduction is possible only with large-scale production. If in the past the minimum batch of devices, which it was expedient to launch into production, was about 10 thousand pieces, then in modern megafabs, according to Dr. Sh. Hara, it reached 100 thousand pieces. As a result, the launch of new developments has become incredibly complicated due to high costs and risks. With the use of minimal Fab, batches of 100 products are economically viable, and the costs of R&D and commercialization of new products and technologies are sharply reduced.
Important advantages of minimal Fab are the high operating ratio of equipment and the shortening of the manufacturing time of devices. In conventional production, you must to wait until the equipment is available. As a result, each batch of products passes on average only two process stages per day. In minimal Fab, about 30 processes per day can be implemented. In the week, minimal Fab allows processing about 10 thousand wafers.
TECHNICAL ASPECTS
The minimal Fab development association is developing the full range of necessary technical solutions, including equipment, technologies and materials.

The minimal Fab system consists of compact process units made in the same design with the same form factor (height – 1 440 mm, width – 294 mm, depth – 450 mm). Each unit is equipped with the Particle Lock Air-tight Docking system (PLAD). The cleaning of the loaded wafer using a laminar flow of air makes it possible to achieve within the unit the ISO class 4 of cleanness. Loading / unloading time is about 30 seconds. Outside the machine, the wafer is in a compact, sealed and impervious to UV radiation minimal Shuttle container. The container can be transported between the process units manually or by means of a robotic system.
In addition to power supply, the machines require only air and nitrogen supply, as well as exhaust ventilation. Chemical reagents are placed in containers. Reagents consumption is very small, for example, only 0.5 см3 of liquid is required for washing.
12.5 mm wafers are cut out by the laser from substrates of the standard size. The wafer has an edge not covered by the photoresist with a width of 0.28 mm and an edge area of 0.50 mm wide, on which the thickness of the resist is uneven. The remaining area of the wafer can be used to form structures.
According to Dr. Sh. Hara, minimal Fab allows to process about 10 thousand wafers a week.
minimal Fab can also be used in combination with traditional equipment. In hybrid production, the minimal Shuttle container is transferred to a clean room, where the wafer is placed into a special holder, which allows it to be processed in conventional machines.
PROSPECTS
At present, not all the necessary process units are available for minimal Fab, in particular, only the DLP-based unit is developed for maskless lithography, which is suitable for design rules above 500 nm. However, it is planned to improve DLP, reaching a resolution of 350 nm. In addition, an electron-beam lithography with a resolution of 100 nm is being developed on the basis of the already available scanning electron microscopy system, which will be further improved.

The capabilities of minimal Fab are constantly expanding. In 2012, cantilever was manufactured in hybrid mode, in 2013, PMOS structures were obtained using only minimal Fab, in 2015 – CMOS structures and a ring oscillator, in 2016 – a device in the BGA package. In 2016, the production of electronic components was demonstrated in real time at SEMICON Japan.
Dr. Sh. Hara noted that if in the 20th century the trends in microelectronics were associated with the increase in production scale and the growing gap between R&D and industrial implementation, now the trend is product customization and a narrowing of the gap between R&D and production. These processes are associated with the development of local consumption, and minimal Fab is the optimal solution to new problems. minimal Fab developers predict that in the future, the market will be divided roughly equally between the systems for 0.5 inches wafers and for 12-inch wafers.
The beginning of commercial use of minimal Fab is a matter of the near future, and it is possible that the first large-scale project will be implemented in Russia (see page 24). ■
Nanoindustry. Issue #5/2017
Readers feedback
Leave a feedback