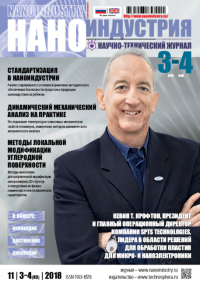 Zelenograd Nanotechnology Center (ZNTC) is one of the few companies that presented Russian high technologies at the SEMICON Europa 2017 in Munich (Germany). Anatoly Kovalev, General Director of ZNTC, answered the questions of our journal at the joint Moscow booth "Made in Moscow".

Issue #3/2018 A.Kovalev
Advanced packaging, production of MEMS and integrated photonics...
Zelenograd Nanotechnology Center (ZNTC) is one of the few companies that presented Russian high technologies at the SEMICON Europa 2017 in Munich (Germany). Anatoly Kovalev, General Director of ZNTC, answered the questions of our journal at the joint Moscow booth "Made in Moscow".
Mr. Kovalev, what are the objectives of the participation of the ZNTC in the SEMICON Europa exhibition?
First of all, I would like to note that the joint holding of SEMICON Europa and Productronica is a logical measure that will give a new impetus to the development of both exhibitions. During the forum, we held negotiations with suppliers of process and control equipment, as well as with institutes of the Fraunhofer Society. We cooperate with the latter in the field of advanced packaging, in particular, we plan to master processing of thin wafers using the so-called "temporary bonding" for the formation of interposers of the 3D structures.
What projects are currently being implemented?
We participate in a number of international projects, for example, in conjunction with the Lomonosov Moscow State University we conduct R&D in the field of X-ray sensors for European programs. In 2017, several projects in the field of integrated photonics for the telecommunications industry were launched. In cooperation with the Ruselectronics holding company, MIET and MIPT, an optical multiplexer and other devices are being developed. In particular, the project of an integrated optical multiplexer for spectral compaction of information in telecommunication devices and high-speed parallel data transmission networks was among the winners of the Innovation Festival of the International Forum Microelectronics-2017 in Alushta. Such an optical multiplexer provides high-speed reliable parallel data transmission. In the future, integrated photonics can become one of the main areas of our work.

The nearest production plans include the organization on the production site in Zelenograd of the serial manufacturing of MEMS for gyroscopes and accelerometers. We aspire to become the leading Russian center in the field of development and production of MEMS, and for this purpose there are interested partners, necessary technological equipment and qualified specialists. Special attention is paid to the training of personnel: ZNTC employees have been trained in Europe, as well as in our production site with the involvement of specialists, including from the institutions of the Fraunhofer Society. With the support of the Zelenograd Development Corporation, we plan to continue to invite leading foreign experts who will help us to introduce new technologies into practice.
What opportunities has opened up the adoption of advanced packaging?
One of the new areas is the creation of transceiver modules based on microwave electronics for civil and special applications. Advanced packaging allows to reduce the weight and size of such devices. The project is implemented in cooperation with MERI, which has the competencies in creation of interposers and active and passive microwave elements using silicon technology. We are counting on a breakthrough in this area in 2018 and preparing a technological base at our main production site and the Proton plant.
Together with Ruselectronics and MIET, the flip chip technology has been successfully mastered. Since the "wire" assembly is practically not used in modern ICs, we plan to introduce a flip chip in the production of devices manufactured using conventional CMOS technology. Here we also cooperate with MERI.
Another interesting project with use of advanced packaging is the creation of modules with integrated sensitive elements and processing schemes, commissioned by Russian partners of the European Organization for Nuclear Research (CERN).
How does the work of the ZNTC as a manufacturing company fit in with the mission of the business incubator?
For the development of new areas specialized start-ups are being created, which are developing certain parts of the projects. For example, three start-ups, in which funds are invested not only by the ZNTC, but also by outside investors, are engaged in the development of integrated photonics. We believe that such organization of work will speed up the creation and commercialization of new solutions. In addition to electronics and photonics, which are traditional areas for us, we are actively developing biomedical projects. In particular, the development of our portfolio company – Nanofix in the field of polysilicon coatings for tools and dentures has good prospects.
Since the ZNTC has grown significantly in recent years, we are discussing with the founders the reorganization of our business structure. The idea is that the nanotechnology center performs the role of a management company, and the technology businesses, start-ups and the project office are transformed into the formats of individual companies. The concept of such reorganization has been approved by the founders, and I believe that in the near future we will proceed to implement it.
Interview: Dmitry Gudilin
Nanoindustry. Issue #3/2018
Readers feedback
Leave a feedback