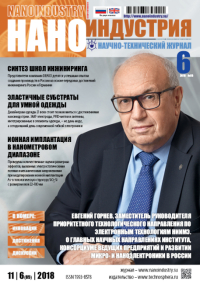 Issue #6/2018 I.Yaminsky, A.Akhmetova, G.Meshkov
Femtoscan online software and visualization of nano-objecs in high-resolution microscopy
The developed FemtoScan Online software allows a variety of processing of experimental high-resolution microscopy data (probe, electron and optical microscopy) using original techniques.
Теги:   atomic force microscopy   multifunctional femtoscan scanning microscope   online-software   scanning capillary microscopy   атомно-силовая микроскопия   сканирующая капиллярная микроскопия   сканирующий микроскоп фемтоскан
Electron microscopy has significantly influenced many areas of science and technology due to its unprecedented atomic and molecular resolution. However, imaging of biological and other sensitive samples is limited due to sample damage caused by the electron beam required for imaging. The radiation dose received by the sample when imaging with an electron microscope operating under typical conditions is comparable to radiation from a 10 megaton hydrogen bomb that exploded at a distance of about 30 m [1].
Optical microscopes have certain unique advantages (non-invasive real-time imaging, large field of view), but their resolution is limited by the diffraction limit. Although there are developments that can achieve nanometer resolution using optics [2], these technologies are not yet fully commercially available.
Atomic force microscopy (AFM) and scanning ion-conductance microscopy (SICM) are excellent methods widely used to visualize the topography of living cells with high resolution. In combination with contactless visualization of the surface topography, SICM is a powerful subcellular resolution tool for studying a wide range of physiological processes associated with the transfer of ions. SICM uses an electrolyte-filled nano-capillary to scan the surface of the sample in solution. The distance between the probe and the sample depends on the ion current generated between the electrode inside the capillary and the electrode in solution.

Using two-channel nano-capillaries, it is possible to simultaneously measure the ion current and scan the sample: one channel provides traditional control of the feedback on the ion current, and the other channel measures changes in potential. In particular, it was found in [3] that the phase is sensitive to local pathways and can be used to quantify the resistance of a single nano-pore. In work [4], the opening and closing movements of a small pore (about 500 nm), which are difficult to visualize by fluorescence, were detected using SICM.
Using the multifunctional FemtoScan scanning probe microscope and scanning capillary microscope, the authors of the article solved the following tasks:
modification of the surfaces of coatings and thin films in liquid media using capillary delivery of substances;
implementation of precision nano-capillary transfer systems;
metrological assurance of the manufacturing technology for capillaries containing 1–7 channels;
experiments on nanolithography of coatings and organic films using atomic force microscopy;
creation of a lithographic pattern with a size of 30–50 nm in experiments on scanning capillary microscopy and nanolithography;
evaluation of the energy interaction of the probe and the surface, as well as of the capillary and the surface of the organic film.
To solve these problems, original FemtoScan Online software was used [5, 6].
For metrological testing of nano-capillaries manufactured on P-2000 puller (Sutter Instrument), it was proposed to use a control sample of the surface of a DVD or blue-ray disk. The sample was placed on the bottom of a Petri dish filled with saline (0.9% sodium chloride solution in water). The nature of the image obtained (Fig.) allows us to estimate the quality of the probe [7]. To do this, we used the function of restoring the shape of the probe from the resulting image. The measured capillary diameter for surface imaging is approximately 90 nm. Indirectly, the hole diameter of the nano-capillary can be determined by the current between the silver chloride electrode located inside the capillary and the electrode in the Petri dish. The result of such an assessment coincides with an accuracy of up to 5% with a value of 90 nm. ■
The study was carried out with the financial support of the Russian Foundation for Basic Research in the framework of a research project No. 17-52-560001.
Nanoindustry. Issue #6/2018
Readers feedback
Leave a feedback