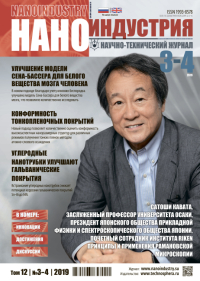 The article presents research results of the effect of carbon nanotubes (trade mark "Taunit") on corrosion characteristics of electroplating coating with a tin-bismuth alloy (Sn–Bi) in 0,1 mol Na2SO4 solution. It was shown that additives reduce the corrosion potential down to 54%.

Issue #3-4/2019 D.V.Davydova, N.V.Tarasova, I.A.Djyakov, Yu.V.Litovka
Modification of galvanic coating "tin-bismuth" by carbon nanotubes to improve the corrosive resistance
The article presents research results of the effect of carbon nanotubes (trade mark "Taunit") on corrosion characteristics of electroplating coating with a tin-bismuth alloy (Sn–Bi) in 0,1 mol Na2SO4 solution. It was shown that additives reduce the corrosion potential down to 54%.
Теги:   carbon nanotubes   corrosion potential   corrosive resistance   galvanic coating   гальванические покрытия   коррозионная стойкость   потенциал коррозии   углеродные нанотрубки
NTRODUCTION
Tin coating on copper is anodic (or protective), as the standard electro-chemical potential of tin is lower than of copper. It means that in the corrosion-active medium first of all tin is destructed and only after the complete dissolution of tin in a certain location copper will be damaged. Tin is sufficiently resistant to corrosion metal, that is why application of a tin coating significantly increases the term of use of the electroplated copper produce. For the increase of corrosion resistance Sn-coatings are deposited from electrolytes with brighteners and doped with bismuth (i.e. tin-bismuth alloy is deposited).

As it is known, inhibitors – substances which decrease the speed of at least one of the processes occurring on the surface of a metal are widely used for the protection from corrosion. Small additions of an inhibitor modify the structure of the coating augmenting in this way mechanical and corrosion-resistant properties of the alloy [1]. Currently carbon nanomaterials have been actively employed as inhibitors of corrosion. Good results for zink [2–3] and nickel [6–1] coating have been obtained using carbon nanotubes (CNT). The used during the process nanomaterial, registered under the trademark "Taunit", constitutes fullerene-like carbon nanotubes – long hollow fibers consisting of graphene layers (in the quantity not more than 30), diameters from 10 to 60 nm and 1–2 µm in length. Considering the amount of structurized carbon in them not less than 95% [11]. "Taunit" is produced at LLC "NanoTechCentre", Tambov. The aim of the work was the study of the influence of the inhibiting additive of CNT "Taunit" in the composition of the electrolyte for the creation of tin coatings on corrosion resistance of the coating "tin-bismuth".

METHODS OF THE EXPERIMENT AND RESULTS

The process of application of the Sn–Bi alloy was conducted in the static electrolytic cells. The samples being coated – copper parts (the alloy M3) with surface area 22 mm2 were placed on the plating rack. Mixing of the electrolyte was performed using walking beams. Anodes were made of tin and placed in the polypropylene fabric cases.

For the even distribution and minimization of agglomerates of the nanomaterial the ultrasonic disperser IL 100-6/4 with the frequency of 22 kHz and the sound intensity of 786 W/cm2 was being used. Dispersion was being performed for five minutes.
For carrying out of the comparative analysis Sn-Bi coatings were deposited from electrolytes without adding nanotubes and with the CNT "Taunit" additives the diversity of concentrations being between 50 and 1600 mg/l.

During the process of electrodeposition carbon nanotubes driven by the kinetic energy of Sn2+ cations, fit in the metallic matrix in the course of the reductive cathode reaction Sn2+ + 2e → Sn. Concentration of nanotubes in the electrolyte lowered during the exploitation. Maintenance of the CNT "Taunit" concentration within the set limits was one of the most important procedures for the process of the nanomodified coating application. In the study [12] the optical method of measurement of the CNT "Taunit" concentration in electrolytes, based on absorption, diffusion and reflection of the luminous flux by polycrystalline graphite is disclosed by the authors, and its realization is grounded on the measurement of the optical density and liquid solutions transmittance ratio and also on the measurement of the substance concentration according to the previously obtained empirical model.

THE STUDY OF THE OPTICAL DENSITY OF THE ELECTROLYTE
The assessment of measurements of the optical density was performed according to the State Standards (GOST) 15150-69 by the photoelectric photometer "KFK-3" [13].

For determining the operational length of the wave it was necessary to find the segment of the curve, where at least one of the conditions would be true: optical density (E) has the maximum value; the curve is parallel to the horizontal axis, i.e. optical density is loosely dependant on the wave length λ [14].

The graph shows that for the studied range λ maximum value of the optical density is observed at λ = 350 nm. After determining the operating length of the wave multiple measurements for different samples of electrolytes were carried out.

The optical density Е and transmittance coefficient Р at the change of concentration (СCNT) of the nanocarbon "Taunit" in electrolytes was measured.

After the selection of stable values the graph was constructed (see Fig.2). According to the obtained data the dependence of the optical density on the concentration of CCN (СCNT), having the greatest value of the accuracy approximation (R²).

As the best values for the corrosion resistance for other coatings [2] were obtained at the lowest concentrations of CNT "Taunit", then for the convenience of use, dependence of the optical density of the electrolyte on the concentration of the CNT is given in the range from 0 to 70 mg/l.

For the correction of the concentration of the CNT the sample of the electrolyte was taken and the value of optical density Е was measured by the photometer KFK-3. Then after the approximating equation (1) the value СCNT was calculated. If the concentration of nanotubes became lower than the determined threshold value the required quantity of the nanomaterial was added [15].

RESULTS AND THEIR DISCUSSION
Table 1 shows the results of the study of the time dependence of the potential of the free corrosion of the alloy Sn-Bi with the additive CNT "Taunit" in the solution of 0,1 Mol Na2SO4, which were being registered for 300 seconds.
The studies revealed that the additive CNT "Taunit" within the range of 50–1600 mg/l contributes to the shift of potential φ (V) of corrosion into the positive area (table 1), which characterizes the dynamics of the protective oxide film formation.
The analysis of the polarization curves (see Fig.3) showed, that the density of the corrosion current i of the Sn-Bi coating, obtained in the presence of 50 mg/l of the CNT "Taunit", in comparison with the analogous coating received without the addition of the nanotubes decreases by 99%.

The rate of corrosion was assessed by the intersection point of the anode and cathode polarization curves. It is seen that the intersection of the curves corresponds to the lesser corrosion current I. The reason of the cathode inhibition reaction is difficult to account for, but according to the initial estimate it is determined by the change of the coating structure.
Table 2 gives the corrosive – electrochemical properties of the Sn-Bi alloy with the additive of the CNT "Taunit" in the solution of Na2SO4 with 0,1 mol concentration. The additives of the CNT "Taunit" improve the corrosion potential of the original alloy by 28–54%. The best result was observed at the introduction of 50 mg/l of the CNT "Taunit" additive.

It was registered that carbon nanotubes "Taunit" in the content of the "tin-bismuth" deposition alloy electrolyte on copper demonstrate the inhibiting effect, thus expanding the area of the passive state of copper, which leads to increase in the corrosion resistance effect of the coatings.

The obtained results revealed that the corrosion current in the presence of CNT in comparison with the coating obtained without the CNT additive drops by 99%, and the potential of the corrosion shifts into the positive area. At the concentration of 50 mg/l of the CNT "Taunit" in the electrolyte maximum values of corrosion resistance are achieved. ■
Nanoindustry. Issue #3-4/2019
Readers feedback
Leave a feedback