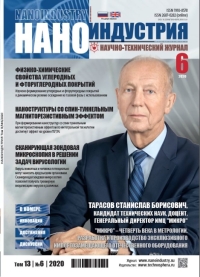 This article demonstrates a possibility of carbon and fluorocarbon coatings formation in a continuous (dynamic) mode of PECVD at atmospheric pressure using a low-frequency plasmatron of low-temperature plasma. The contact angle of wetting of the obtained coatings was established and the study was carried out using AFM.

This article demonstrates a possibility of carbon and fluorocarbon coatings formation in a continuous (dynamic) mode of PECVD at atmospheric pressure using a low-frequency plasmatron of low-temperature plasma. The contact angle of wetting of the obtained coatings was established and the study was carried out using AFM.
Теги:   carbon and fluorocarbon coatings   deposition from gas phase   осаждение из газовой фазы   углеродные и фторуглеродные покрытия
INTRODUCTION
The life cycle of polytronic and optoelectronic products largely depends on the properties and characteristics of polymer materials that make up their components [1, 2]. Under the influence of such external factors as high humidity, physical damage and biological contamination, the properties of polymeric materials undergo significant degradation, which can lead to a failure of the entire device [3, 4]. In order to minimize the influence of environment on the surface of polymeric materials, ion-plasma technologies in vacuum are used for the deposition of thin carbon-containing coatings from the gas phase [2, 5].

The use of carbon as the main coating material makes it possible to form a layer with fully compensates valence bonds, which properties vary over a wide range depending on the deposition technology [6]. In this regard, thin carbon-containing films have proven themselves well as a protective coating on the surfaces of various materials [7, 8]. Addition of fluorine to the coating composition makes it possible to increase the hydrophobic properties of the surface, as well as to achieve increased chemical and mechanical resistance [9, 10]. Modern production methods of new materials and surface treatment of various products rely heavily on energy-efficient technologies. These technologies include methods based on the use of low-temperature atmospheric pressure plasma, which have proven themselves in a wide range of human activity areas [11–14]. Among the many devices for generating low-temperature plasma, the most advantageous is a low-frequency (LF) plasmatron of atmospheric pressure, which allows spot processing or deposition from the gas phase with the minimized influence of the surrounding atmosphere without the need to create and maintain a vacuum and with minimal energy consumption [15]. This makes it possible to process with relative ease such thermolabile materials as polymers, which are widely used in optoelectronic and radioelectronic devices.

To form a coating over the entire area of a product using a LF-plasmatron of atmospheric pressure, it is necessary to consider a mode that implies uniform movement of the plasmatron nozzle over the substrate surface. The dynamic mode is a continuous mode of coating formation with fixed values of the LF-plasmatron nozzle velocity and the processing step.

The goal of this work is to investigate the carbon and fluorocarbon coating properties obtained by an atmospheric pressure LF-plasmatron in the dynamic mode of vapor deposition.

METHODS OF RESEARCH
Deposition of carbon and fluorocarbon coatings from the gas phase was carried out on an experimental setup, which includes a monopolar low-frequency low-temperature plasma torch with a power of up to 100 W and a frequency of 70–130 kHz. To implement the dynamic processing mode, the plasmatron nozzle was mounted on a CNC unit for precision control of the geometric processing parameters (Fig.1).

Deposition of carbon coatings from the gas phase was ensured by supplying several gas streams: the plasma-forming and transport gas – Ar, and the film-forming gas – C6H12 vapor. Formation of fluorocarbon coatings was carried out using a transport gas – CF4. In the process of deposition, the following technological parameters were recorded: the distance of the plasma torch-substrate (15–24 mm), the speed of movement (1–3 mm / s) and the processing step (3–6 mm). The total gas flow was 7.1 ± 0.1 L / min at a C6H12 concentration of 2.5%. Deposition from the gas phase was carried out on substrates made of polyethylene terephthalate (PET) and monocrystalline silicon, depending on the research carried out. The contact wetting angle was measured using an MG microscope with a goniometric attachment; the relief study was performed using an NT MDT SolverNext scanning probe microscope with an AFM head.

Application of a carbon coating led to the hydrophilization of PET and a decrease in the contact angle of wetting to 42°, which is associated with the processing and thermal effect on the near-surface layer of PETF, leading to its hydrophilization [12], in parallel with the processes of deposition from the gas phase. It was assumed that the resulting coatings allow of recording the results of surface treatment of polymeric materials, while the coating itself, due to an increase in the concentration of C–O groups, should increase hydrophobicity. Figure 3 shows a sample of a carbon coating on a single-crystal silicon substrate, where the carbon coating leads to an insignificant increase in the hydrophobicity of the surface due to the minimized effect of low-temperature plasma on the near-surface layer of silicon, as well as due to a different type of substrate conductivity.

The changes in the contact angle of wetting which are due to changes of the processing step indicate a non-uniform distribution of thickness depending on the distance between the passages of the LF-plasmatron nozzle above the substrate surface. Apparently, the processing step of 4 mm is associated with the layers formed by the C–H and C–N groups at the boundary of ionized particles and the recombination zone.

The effect of the plasmatron-substrate distance on the contact wetting angle characterizes the change in the chemical composition of the resulting coating and the concentration of C–C, C = C, C ≡ C, C = O bonds as a result of dissociation of the film-forming mixture. An increase in the number of C–C components with an additional increase in the distance of the plasmatron-substrate allows of increasing hydrophobicity of the resulting coatings.

An increase in the speed of nozzle movement of the LF-plasmatron made it possible to increase the hydrophobicity due to a more uniform relief. In addition, the increased speed enabled to carry out deposition of the most stable dissociation products that did not undergo recombination with atmospheric air, which did not reach the substrate surface during the movement and propagation of the gas mixture.

The relief of carbon and fluorocarbon coatings was studied on substrates of monocrystalline silicon. Figure 4 presents optical images of the obtained coatings which show that with an increase in the speed of movement of the plasma torch nozzle, the homogeneity of the obtained coatings increases, as can be seen by a change of the reflected light colour. Application of a fluorocarbon coating makes it possible to achieve even distribution of thickness, with the exception of points where there is an increased concentration of coating material in the form of black dots. Most likely, this is due to the breakdowns of the LF arc discharge, which in rare cases lead to a sharp increase in the coating thickness. The lines observed in the images are traces that repeat the crystallographic orientation of single-crystal silicon (111), which appear due to the increased conductivity with respect of the rest of the substrate volume.

CONCLUSIONS
As a result of the conducted work, the influence of the technological parameters of vapor deposition from the atmospheric pressure LF-plasmatron on the physical and chemical properties of carbon and fluorocarbon coatings was shown. The contact wetting angle value and the effect of the substrate material on the resulting coating have been determined. The impact of the distance between the plasmatron and the substrate and the velocity of the LF-plasmatron nozzle on the change in the hydrophobicity and hydrophilicity of the surface is nonlinear, which indicates the influence of the processes of recombination of an ionized gas mixture with atmospheric air, which can be used to obtain coatings with a given composition and properties.

The effect of the velocity of the plasmatron nozzle moving above the substrate on the relief of the resulting coatings is shown, and the influence of the etching component CF4 on the resulting relief of the coatings is considered. The roughness of the coatings was established, which averaged 11–12 nm for carbon coatings and 7–8 nm for fluorocarbon coatings. ■
Nanoindustry. Issue #6/2020
Readers feedback
Leave a feedback