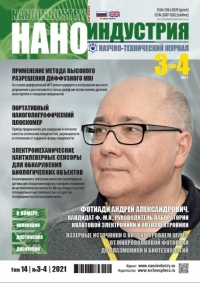 Recognition of viruses in the medical diagnostics can be performed using a polymerase chain reaction and an enzyme-linked immunosorbent assay. Although these methods have extremely high sensitivity and selectivity, it is necessary to involve a qualified personnel, investments, use additional labels and time to data processing to diagnose. Nowadays, effective and easy-to-use small sensors indicating the result with high specificity are absolutely necessary.

Recognition of viruses in the medical diagnostics can be performed using a polymerase chain reaction and an enzyme-linked immunosorbent assay. Although these methods have extremely high sensitivity and selectivity, it is necessary to involve a qualified personnel, investments, use additional labels and time to data processing to diagnose. Nowadays, effective and easy-to-use small sensors indicating the result with high specificity are absolutely necessary.
Теги:   electromechanical cantilever sensors   immunosorbent assay   pcr   иммуноферментный анализ   пцр   электромеханические кантилеверные сенсоры
INTRODUCTION
A wide spread of viral and bacterial diseases, especially in winter, leads to incorrect diagnosis and patients take antibiotics at any signs of cold. It is complicated to disclose a definitive diagnosis inferred from external symptoms if the disease is caused by a viral or bacterial infection. Adequate treatment of an infection depends on early detection of the disease, however, the modern standard methods based on cultivation of bacteria and testing of bacterial sensitivity to antibiotics include long-time protocols and, sometimes, can be labour-consuming.

The widespread use of antibiotics leads to appearance of antibiotic-resistant bacteria and makes it difficult to treat diseases. Infectious diseases caused by bacterial pathogens are still considered as one of the most serious threats to global health. Nowadays, pill-resistant bacteria lead to 700,000 deaths annually around the world, and experts expect that by 2050 this value can reach up to 10 million because of the massive resistance of bacteria to antibiotics [1].

Despite the large number of studies dealing with various methods of diagnostics, PCR still remains the most reliable method, though requiring specialized personnel, expensive equipment and transportation of samples to the laboratory. All of that does not allow of accomplishing the principle of bedside diagnostics, when the district doctor may disclose an accurate diagnosis in 10–15 minutes. Testing strips partially solve this problem because the results can be false-positive while the cost of such test is comparable to the laboratory analysis.

Thus, in the field of medical diagnostics there is still no simple, accurate, compact device that could cope with this task. Electromechanical cantilever sensors can present the alternative highly sensitive and inexpensive solution.

METHODS OF RESEARCH
There two main operating modes of electro-mechanical cantilever sensors – static and dynamic. The detection of pathogens (including growth measurements or metabolic activity) takes place on a sensitive element surface and leads to its deviation (static mode) or to a resonant frequency shift of the sensor oscillations (dynamic mode).

With the aid of the static mode in [2], a direct detection of influenza virus A in concentrations below 105 virions/ml was demonstrated using a piezoceramic disc, synthetic syialyl glycopolymers, which biospecifically bind gemagglutinin proteins. It was also shown that the frequency shift is proportional to the change in the surface voltage caused by virus adsorption, and the sensitivity is inversely proportional to the resonator thickness. Therefore, using a more subtle piezoceramic plate, it is easy to increase the sensitivity several times.

In the dynamic mode, the resonant frequency of the piezoelectric element (cantilever) varies depending on the attached mass and the surface layer changed due to its rigidity. In this mode, cantilever behaves like a harmonic oscillator, and its efficiency depends on the resonant frequency f determined by the rigidity of the cantilever proper, the adsorbed layer k and the effective mass m, as well as Q-quality.

Sensitivity of the electromechanical sensors to detect biological objects depends on various parameters, such as shape, dimensions, materials, operation mode, detection scheme, environment and sensory layer, which must be selected depending on the detectable target.

Mechanical characteristics of the cantilever (static deviation and amplitude of resonant oscillations) can vary from angstroms to hundreds of nanometers, which requires a precision signal reading methods for accurate quantitative assessment. The most popular schemes are optical, piezoresistive and piezoelectric. The optical scheme records deviations of the laser beam from the cantilever tip. The piezoresistive scheme is based on variation of the conductor resistance at the bend of the cantilever and, as a rule, uses the Whitstone bridge-based electrical system to reduce cross-interference and improve the signal-to-noise ratio.

The piezoelectric circuit registers mechanical oscillations under the action of alternating voltage. When m mass increases due to attachment of molecules, the resonant frequency f is reduced. The sensory layer (as a rule, antibodies) is fixed on the surface of one of the piezoelectric sensor electrodes. The electrodes excite resonance in the piezoelectric, and also read the signal from the sensor. When the target binds to the sensory layer, there occurs a change in the mass Δm on the electrode surface, which leads to the time-dependent frequency shift Δf [3] (Fig.1).

With the aid of a piezoelectric plate (Piezoelectric Plate Sensor, PEPS) in the flow fluid cell, it was possible to detect Clostridium difficile for 40 minutes without selection of genes, amplification and fluorescent labels [4]. In [5], PEPS covered with DNA probe were used to detect the double mutation of the hepatitis B virus. With the DNA probe immobilized on the PEPS surface, the DNA detection was implemented in situ and with atomic sensitivity [6].

In [7], the piezoelectric plates modified with antibodies to microalbumin were used to study the activity of antibodies conjugates labeled with peroxidase, which made it possible to control using an enzyme immunoassay analysis. Also, using piezoceramic sensors, DNA detection was demonstrated [8].

With the aid of a piezoelectric plate coated with DNA probes, a double mutation of the hepatitis virus in the urine in situ was shown [9]. The piezoelectric sensor was covered with gold electrodes on both sides and a thin layer of isolation. The target DNA binding from the sample of a biological fluid with DNA probes on the surface of the rectangular piezoelectric plate caused a resonant frequency shift, which increased the length and width of the sensor. It was shown that the sensitivity of the method is 60 copies/ml, while the measurement is carried out in 30 minutes.

In [10], piezoelectric sensors were combined with PCR for simultaneous detection and genotyping of 16 human papilloma virus strains in the samples scraped from the surface of the cervix. Piezoelectric sensors were covered with synthetic oligonucleotides, and the tests were performed after amplifying PCR without using labels, the results showed high selectivity and reproducibility of the method comparable to standard analysis. Chen et al. [11] developed a piezoelectric stainless steel sensor with metal clamps to detect hybridization of PCR products of the human papilloma virus and studied the effect of changes in the resonant frequency stability.

Electromechanical biosensors operating in dynamic mode are able to weigh the mass of the attached target with high sensitivity: at the level of picograms and even femtograms [12]. In addition, using a biosensor, you can measure the mass of a bacterium in the medium and use this data as an indicator of the bacteria growth rate [13].

Microcantilevers coated with nutritional layers, for example, agarose, were able to detect an active height of E. coli for 1 hour under conditions of controlled temperature and humidity [14]. The estimated sensitivity of the growth of bacteria was ~ 140 GP/Hz, which corresponds to about 200 E. coli cells. Growth of the Aspergillus Niger’s immobilized mushroom and S. cerevisiae single-celled yeast led to a resonant frequency shift for several hours, registration of growth in the use of traditional cultivation methods takes longer [15].

CONCLUSIONS
The metabolism of bacteria can be traced by vibrations of the cantilever in the quasistatic measurement mode in the aquatic environment, and also, in parallel, it is possible to carry out a test for antibiotics resistance. In [16], measured were not the static deviation of the cantilever or the change in its resonant frequency but analysed were the time-dependent fluctuations (background noise) of the cantilever oscillations. Live bacteria were covalently sewn to both sides of silicon V-shaped cantilevers using aminopropyltriethoxysilane (APTES) as a linker molecule with good biocompatibility. Metabolic activity of the attached E. coli and S. aureus caused low-frequency cantilever deviations. In the presence of ampicillin and kanamycin antibiotics the channel oscillations decreased sharply due to the effects of drugs on the bacteria which made it possible to quickly confirm the antibacterial effect.

In addition, it was shown in [17] that 50 cells are able to generate measurable oscillations. Thus, the cantilever sensors are quite suitable for carrying out the test on the antibiotic resistance of a small number of bacteria in less than one hour.

Declaration of Competing Interest. The authors declare that they have no known competing financial interests or personal relationships that could have appeared to influence the work reported in this paper.
Nanoindustry. Issue #3-4/2021
Readers feedback
Leave a feedback